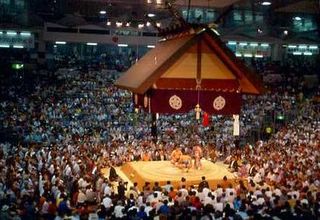 The Nagoya Grand Sumo Tournament has been on our screens since Sunday. There are six grand tournaments a year and they alternate between Tokyo and the provinces. The Mongolian wrestler Asashoryu [1, 2, 3], the only current wrestler with the rank of Yokozuna or grand champion, is totally dominant at the moment. He has won all of the grand tournaments so far this year and only missed out on one of last year's.

We've had four days of wrestling and Asashoryu has one all four of his bouts, which already puts him ahead of all of his main rivals in the event. He is actually on a 20 bout winning streak in the grand tournaments, so it is difficult to see past him as the eventual winner. Mind you, sport has a way of springing surprises. The real fascination at the moment is watching a wrestler in his prime so completely dominate his rivals, some of whom are considerably bigger than him.

Here are his victories:

There are 11 consecutive days of wrestling left. He was lucky on day 2 but day 4 was classic Asashoryu: bullying his opponent out of the ring with powerful arm pushes and then adding some unnecessary afters at the end just to show who is boss.

Ama, the small but nippy wrestler I mentioned in a previous post, isn't doing so well. He is 2 and 2. This was his most comprehensive defeat. Poor guy needs to put on some weight.
Posted by Nonjatta at 7:12 pm

Thanks for posting the video clips. I can't get any sumo coverage over here. I've got a playbill (?) from Akebono's first tournament as a yokozuna. It struck me as unusual that such a long name was represented by just one Chinese character. Explain that, Kanji-boy.

My little book confirms that Akebono is indeed a single character word: a literary way of saying daybreak. Apparently, before he was Yokozuna, Akebono purposefully miswrote his Kanji, missing out one or two strokes and only changed it to the proper Akebono when he was promoted. One of the reasons the Japanese liked him so much was that he did stuff like that.

The sumo video is lifted from this site:

They seem to upload the videos a few hours after the sumo has finished.

When I finish work, i can watch it with a can of beer!

Day 5 - Asashoryu won again today and has 5 wins and 0 losses.

Tochiazuma, one of the two Ozeki (second highest rank in sumo) who had been one off the lead until today, fell to a 3 - 2 aggregate. Kaio, the other chasing Ozeki, is 4 - 1 after a win today. The third Ozeki, Chiyotaikai, is back on 3 and 2. One other wrestler called Iwakiyama, who is much lower down the rankings, is 5 - 0. But he has only been fighting relatively weak wrestlers so far.

Day 6 - Asashoryu beats his fellow Mongolian Kyokushu. There had been some talk of some bad blood between them but it turned out fairly tame.

The two ozekis are now both two off the lead. Kiao lost and Tochiazuma won.

However, the lower ranked Iwakiyama just keeps on winning. He is still unbeaten and the only wrestler level with Asashoryu. The big nasty wrestlers will soon be coming his way and he looked as if he might have sustained an injury in this last bout.

The nippy Mongolian Ama, who I took a liking to in the last Basho, is losing his bouts in miserable fashion. He now has 4 losses and 2 wins.

An interesting day.
Asashoryu's bout.
And here is a slow motion replay.

Normal service is resumed. Asashoryu defeats the man he was sharing the lead with.

Hey, what's with all these wrestlers from the old CCCP? How'd they sneak into the game?

They seem to have pushed out the Hawaians. There is nobody from that direction anymore but, as you say, there are plenty of Bulgarians and Russians and similar. The Mongolians are the real phenomenon though. Their Mongolian sumo makes them technically very good and they are hungry for all the cash. Apparently, each heya is only allowed two foreigners and they are queuing round the block.

An ridiculously easy Asa win.
And, at last, Ama does his stuff.

Perhaps I spoke too soon about Asashoryu's dominance! Another upset, again at the hands of a European: