Anybody learning English and struggling with our ridiculous spelling/pronunciation can, to some extent, blame "The Great Vowel Shift". Between the 1400s and 1700s, English pronunciation was totally revolutionised. It happened astonishingly quickly and it is not completely clear why:

Some theories have it that the massive population movements into the South East of England after the Black Death may have led to the shift, with regional accents mixing with and influencing that region's standard pronunciation. There was also great social mobility in and around London following the plague, allowing previously marginalised pronunciations to influence the standard speech of a region that has since huge influence on accepted English. Others argue that the dropping of French by aristocrats in England may have influenced pronunciation. The toffs may either have tried to create their own posh accent more on the French model or, conversely, attempted to speak English in a way they felt was further from French (because France was an enemy).

The shift may be continuing. How do you pronounce "route"? Some Americans can rhyme it with "out". The English are still mired in a distinctly Anglo Saxon "boot". Anyway, all this change is one reason why English spelling is such a nightmare. It was standardised during this shift and therefore has little or no reliable connection to actual pronunciation. For more on that, see "ghoti" and English spelling reform.
Posted by Nonjatta at 11:11 am 1 comment:

The roots of break dancing:

The Charleston to Daft Punk:

And The Charleston to the real stuff by modern chaps:


Tugged forelock to Kottke.
Posted by Nonjatta at 10:03 am No comments:

from Calvin and Hobbes.
Posted by Nonjatta at 9:54 am No comments:

Magnetic duct tape.
Posted by Nonjatta at 8:22 am 1 comment:

A very good online course, with lots of vids.
Posted by Nonjatta at 2:12 pm 1 comment:

How long will it take for these to be sampled.
Posted by Nonjatta at 6:56 pm No comments:

So, these two artists decided to forget all that individual inspiration and creative vision nonsense and just professionally poll the people on what sort of paintings they should paint.

The American public`s choice stipulated a landscape, group of people, historical figure etc.. Many wondered what it said about Americans: 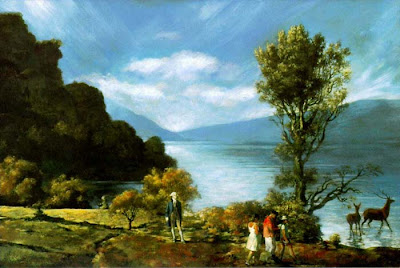 Then they went to 13 other countries and used the same advanced polling techniques. See what they got. Make sure you look at Holland's.

That was all such a success that they moved on to music, with the help of a bloke called Dave Soldier. Among other things, they found out that people prefer 3-10 minute long pieces. You need to check out the 21 minute long Most Unwanted Song, featuring a rapping opera diva and bagpipes! The intro sample on emusic doesn't do it justice. It is a work of genius. The Most Wanted is dire.
Posted by Nonjatta at 4:37 pm No comments: