Like most people, I was already pretty familiar with images of the atomic bombing of Hiroshima, which killed more than 140,000 people: 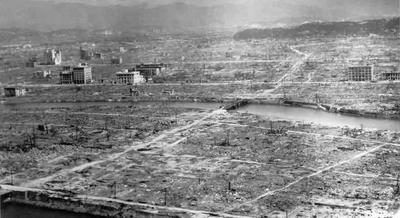 And the atomic bombing of Nagasaki, which killed at least 100,000 people. 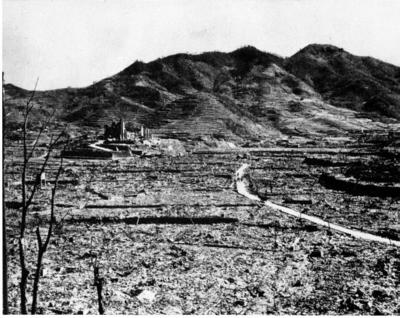 But I was less familiar with images like this one, of the conventional bombing of Tokyo: 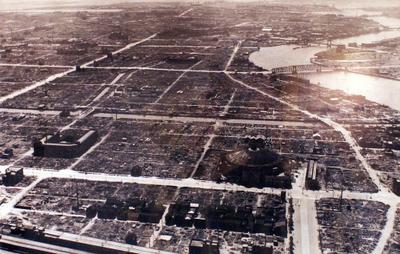 On the night of March 9, 1945 alone, more than 100,000 people died and 16 square miles of the city were flattened in one fire bomb raid. In the following two weeks, a further 31 square miles were destroyed in 1,600 firebomb sorties. I do not know the total number of people killed in more than two years of bombing of Tokyo.

Other large cities, including the major conurbations of Osaka, Kobe and Nagoya, were also firebombed. The Japanese animated film "Grave of the Fireflies" is based on the experience of Kobe, one of the first cities targeted in these raids.

On a slightly less depressing note, here are some pictures of bombed city districts and how they look now: 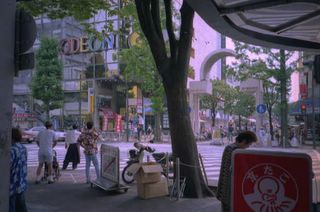 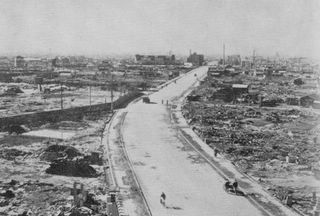 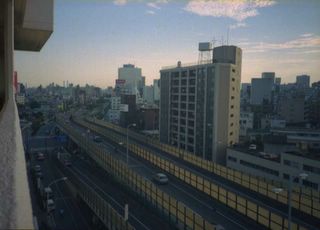 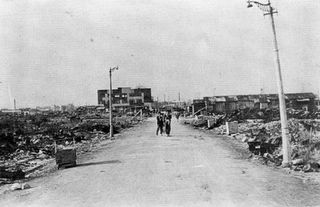 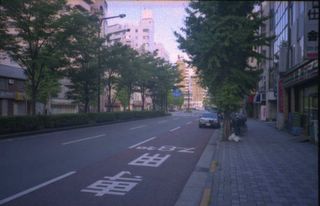 Of course, Dresden is another example of the wholescale destruction and appalling loss of life caused by 'conventional bombing'. And the people can't be reconstucted. So, collectively and individually, we continue for supposedly 'just' causes ....

Hmmmm. I think the first thing to do before taking a stance on the justice or injustice of the cause is for everybody to accept that these terrible things happened and think about the reality of the horror that was inflicted on ordinary people.

The arguments for the justice of what was done are complex. The man who masterminded the allied bombing,
Curtis LeMay, said after the war: "I suppose if I had lost the war, I would have been tried as a war criminal." But he felt that the bombing saved lives by encouraging Japan to surrender earlier. The Japanese prime minister Fumimaro Konoe did say: "the determination to make peace was the prolonged bombing". The US Secretary of State James Byrnes once claimed that 500,000 Americans would have been killed in an invasion, plus countless Japanese. In the summer of 1945, however one US estimate projected between 20,000-110,000 combat deaths from the first invasion push invasion. Still a big number. Plus, of course, lots of Japanese military and civilians.

On the other hand, the top military brass seem to have had little time for such justifications. Eisenhower wrote in his memoir The White House Years, "In 1945 Secretary of War Stimson, visiting my headquarters in Germany, informed me that our government was preparing to drop an atomic bomb on Japan. I was one of those who felt that there were a number of cogent reasons to question the wisdom of such an act…During his recitation of the relevant facts, I had been conscious of a feeling of depression and so I voiced to him my grave misgivings, first on the basis of my belief that Japan was already defeated and that dropping the bomb was completely unnecessary, and secondly because I thought that our country should avoid shocking world opinion by the use of a weapon whose employment, was I thought, no longer mandatory as a measure to save American lives." Douglas MacArthur, the American commander in the theatre was not consulted on the dropping of the atomic bombs and later said believed they were "completely unnecessary from a military point of view."

Such retrospective arguments on the balance of deaths on either side of these decisions seem somehow unsatisfactory. They are unsatisfactory on both sides. On those who support the bombing, you get people justifying the burning of hundreds of thousands of civilians to death (the US bombers are accused by some of having dropped incendiaries around target areas to seal the victims in before burning down the Tokyo districts on March 9) because they saved a hypothetical and completely speculative number of
US GIs. On the other side, you get these rather unsatisfactory distinctions between "innocent" civilians and military conscripts on both sides, which seems muddle headed and potentially dangerous romanticism.

An eyewitness to the Hiroshima bombing, John A. Siemes, professor of modern philosophy at Tokyo's Catholic University, called into question the whole distinction between military and civilians in the case of nations that had waged total war: "We have discussed among ourselves the ethics of the use of the bomb. Some consider it in the same category as poison gas and were against its use on a civil population. Others were of the view that in total war, as carried on in Japan, there was no difference between civilians and soldiers, and that the bomb itself was an effective force tending to end the bloodshed, warning Japan to surrender and thus to avoid total destruction. It seems logical to me that he who supports total war in principle cannot complain of war against civilians. The crux of the matter is whether total war in its present form is justifiable, even when it serves a just purpose. Does it not have material and spiritual evil as its consequences which far exceed whatever good that might result? When will our moralists give us a clear answer to this question?"

By questioning the distinction between military and civilians the prof came to a line of thinking which seems much more fundamental. We have all been answering his question for half a century since. To which, in practice, we have been answering no for fifty years. Of course, we have been getting on with nasty little colonial limited wars in the mean time, as if our nation states and their extensive militaries were kind of addicted to them.

This is a similar picture of the destruction in Dresden. The main difference in terms of standing buildings is I think because the Japanese tended to build in wood.