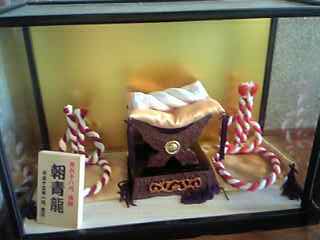 I have acquired this little item. A. thinks it is absolutely naff but I am quite pleased with it. It turns out that A.'s dad is on quite chummy terms with the "heya" of the aforementioned sumo wrestler Asashoryu. A "heya" is usually translated into English as a "stable" and is like a horse racing stable in that each wrestler is trained from a young age in it and represents it in competition. A.'s dad went to Asashoryu's wedding.

Anyway, this box was sent as a gift from Asashoryu when he was made Yokozuna, or grand champion. The white thing on the stand is a piece of the rope that Yokozuna wear around their waists to mark their rank. There is a ceremony, when wrestlers first become Yokozuna, in which all the members of their heya collectively wind the white rope for them. 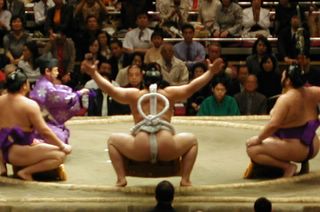 Another one for the car boot sale in time!

That's what I have been telling Kuri

No, I agree with et!