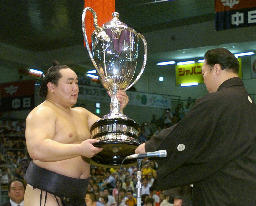 Sumo haters will be delighted to know that the Nagoya grand tournament has ended, which means that there will be no more sumo here, barring more underwear deliveries, until September. We went into the last day with the Mongolian Yokozuna (or grand champion) Asashoryu tied for the lead with the Bulgarian Kotooshu, who is much more lowly ranked. Both were expected to win their final day bouts and everybody was looking forward to a head-to-head tie breaker between the towering European and the tigerish Mongol.

It turned out to be a bit of a let down. Kotooshu flopped in his match, leaving Asashoryu to wrap it up against the disappointing Tochiazuma without the expected head to head. This is Asashoryu picking up his fifth Emperor's cup of the year. He has now won 13 tournaments, making him the most successful foreigner ever, and he looks as if he might, if he is lucky with injuries, eventually establish himself as one of the greatest Yokozuna of all time.
Posted by Nonjatta at 11:00 pm

Did you say September? That's a bit worrying....might lead to a change of plan as I think doltrane is quite keen on the sumo.

Could definitely get into it - certaily enjoyed the clipped highlights!