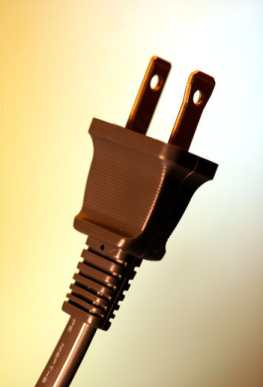 G. got in a major tizzy yesterday because he wanted to play with the heater plug and he was not allowed to. By “major" I mean about as upset as a one-year-old can get, which is pretty upset as anyone with any experience will know. The mood eventually passed and he forgot about his plug fixation.

As he slept last night, however, A. says she saw him reaching out and grabbing at what she could only figure was a dream plug. He did this several times and then got quite exercised in his sleep as, presumably, a phantasmal Mum or Dad intervened and turned his dream into a nightmare.

Update: In preparation for G.'s return from the nursery today, I had stacked a load of pillows in front of the plug socket. The first thing he did after I carried him into the room was turn to the plug and hurl the pillows to one side. We resumed where we left off yesterday.
Posted by Nonjatta at 9:41 pm

A gap in the market for FisherPrice?