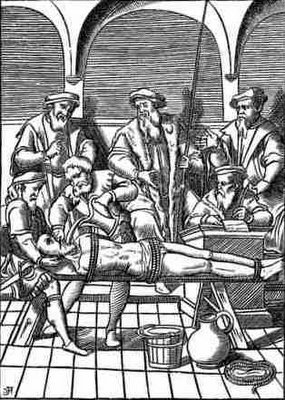 The medieval version of "waterboarding"

Can someone explain something really basic to me? It has taken me a while to digest reports like this and this and comment like this about the US playing fast and loose with the Geneva Convention and basic human rights in the War on Terror. Here is an example of the kind of thing I am talking about. It is called "waterboarding". It is not the result of a few CIA officers getting out of control in one of those secret prisons in central Europe. It seems to be in the manual:

Water Boarding: The prisoner is bound to an inclined board, feet raised and head slightly below the feet. Cellophane is wrapped over the prisoner's face and water is poured over him. Unavoidably, the gag reflex kicks in and a terrifying fear of drowning leads to almost instant pleas to bring the treatment to a halt.

According to the sources, CIA officers who subjected themselves to the water boarding technique lasted an average of 14 seconds before caving in. They said al Qaeda's toughest prisoner, Khalid Sheik Mohammed, won the admiration of interrogators when he was able to last between two and two-and-a-half minutes before begging to confess. [source]

Anyway, the really basic thing I don't get is the insistent rhetoric which drums away as a justification for these violations of the normal rules of war and of human rights. This discourse has it that we are fighting an exceptional and unprecedented war in which the merest scrap of information about the enemy's plans might save thousands of lives. It seems a powerful line but, leaving aside the observation that torture is a systemic disease that has always threatened to corrupt and degrade intelligence gathering agencies, destroying their ability to provide accurate information to leaders, the really basic question I need answering is this:

Isn't it true that in all wars the merest scrap of information about the enemy's plans might save thousands of lives?

I mean, in World War Two, hundreds of thousands of lives were lost or saved due to good or poor intelligence gathering. So is there anything really new about this? Maybe it is right to break the existing rules, but why are we framing the debate as if we are facing a novel dilemma?
Posted by Nonjatta at 2:42 pm

You are absolutely right about the position of intelligence in all wars. The way the issue is being framed, seeing it as a response to a novel and exceptional situation, is another attempt to justify the unilateral breaching (or 'bending') of international law in respect to torture and the treatment of prisoners of war, a framework of international law that America took a lead in framing and uses frequently in its critiques of the actions of some other states (but not others, most conspicously Israel). So unlike many of them who just act as they wish, they need to attempt a moral justification. But it doesn't wash and there has been no attempt to make the case for a change in international law in response to the alleged 'new situation' (as there was no attempt to gain legal approval for the internal spying operation).

In terms of the fundamental moral principle involved, I cannot see that it can ever be RIGHT to torture people - although there may be exceptional circumstances which MAY be considered to mitigate the wrong, a judgement to be made by others NOT by the perpetrators.

At a pragmatic level, it doesn't work either. The 'quality' of the intelligence gained is highly suspect and requires cross checking with other sources, access to which is likely to be affected by the fact that a country is using torture. An example is in GB where there is a counter productive impact on the co-operation of members of the Muslim communities from the existing and proposed counter-terror measures. To this has to be added the long-term negative impact on the country's international reputation and influence.

On a more general point, all war leads to an inevitable and serious erosion of standards of collective and individual behaviour, in all areas of its conduct. The attempt to limit and control this is commendable, necessary but ultimately hopeless. The longer war goes on and the more difficult it is to progress, the more debauched we become - and I use 'we' advisedly.

To be more positive, it is possible to detect signs that ordinary people in America and here are begining to recognise this direction in relation to the disastrous 'mission' in Iraq and are starting to act to try to stop the slide. Everything that highlights the dire consequences of what governments have embarked on is to be commended, supported and spotlit, and at last the press is where it should be on this.