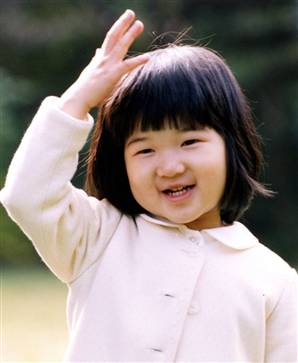 I usually relegate news like this to my Japanese news feed (see top left or bottom of this page), but the discussion going on in Japan at the moment about whether to allow a female monarch is interesting. Female monarchs are not a novelty here. There were a number of female emperors before Japan was "modernised" but ever since the American occupation there has been a law limiting the line to men only. Now, with no male heirs available, the Government is preparing to legislate to allow women to ascend the throne.

What I find interesting is this： it seems that the Prime Minister's preferred option may be a simple system in which the first born child will become monarch. The Government commission set up to investigate the problem has recommended that option. In other words, there would be no male preference at all. That would mean that Japan's royal house would be way ahead of most of the rest of the world's monarchies in terms of gender equality.

Can't help feeling sorry for Princess Aiko though. Modern monarchy is a cruel and unusual punishment, a tyranny of the majority over an individual.
Posted by Nonjatta at 6:03 pm

We saw the film "The Sun" at the weekend so we were talking about his issue - we too thought how radical a proposal it was for the heir to be the first born!

I'm no expert on Japanese history, but I think female monarchs in Japan are a lot rarer than you imply, and it predates American involvement by more than 1000 years.

Empresses were fairly common until Empress Shotoku came along in the 700s. As wikipedia tells it, “…she is remembered chiefly for her affair with a Buddhist monk named Dōkyō, a man upon whom she heaped titles and power. The affair illustrated the growing power of the Buddhist priesthood and was a prime factor in Emperor Kammu's decision to move the capital away from Nara in 784.” I’ve heard it also led to disallowing female monarchs from then on.

There were two Empresses in the Edo period, but they seem to be anomalies.

That’s the way I remember it, anyways.

10 out of 125. A bit less than one in ten, I guess.
8 of them between 599-770. (Exactly half male and half female.)
The sense that it is common probably comes from the fact that after the late 12 century, the imperial family more or less lost power and people tend to regard this era as "the golden era" for the imperialy household and aristcrats. (That is, Meiji period excluded, of course)

Pete,
And neither am I an expert on Japanese history. But don't you feel expertise is such a dampener on a good discussion? Here are the rules: from now on only Wikipedia can be used as a reference. Anything else is just cheating.

The most recent Japanese empress ruled in the 18th century, about the same time a George III in England. It seems to me that Queens/empresses are anomalies under most monarchical systems. In total, there have been eight empresses compared to seven queens of england (including Lady Jane Grey, who I think only ruled for about 9 days, and the Mary half of the joint monarch William and Mary).

By the way, Ay is right, there have been 10 femaile reigns in Japan, but two of them were selected to rule twice, so only eight female monarchs. Still, more female monarch s that in England. I think I was wrong to imply that the first rule against women monarchs came in the American occupation. The current law was passed in the US occupation but the first legal provision to exclude women I think came in 1889, still well after the westernisation/ modernisation of the Meiji period began. Anyway, the point remains, empresses were are by no means a novel idea and the provision to make the first born, whatever their sex, the empress is radical not only in Japanese terms but in international terms

Only seven queens of England? I guess Victoria and the two Elizabeths hold so much sway in the popular imagination that they tend to outweigh most of the fellas.

So the problem is with the quality of the Japanese empresses. Maybe Aiko can do something about that.

Yes. It was actually quite unusual.
It seemed so strange before Victoria that people seriously discussed changing her name to Elizabeth.