Do the Japanese understand Englishness better than the English? 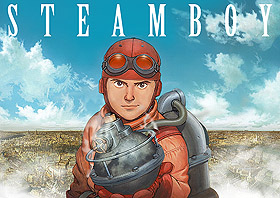 Tonight we watched an animated film called "Steamboy", directed by Katsuhiro Otomo. It was pretty good.

At first sight, Steamboy is a rip-roaring action movie full of elaborate chases, bangs and whizzes. It also has a few subtexts, some of which I am sure I did not pick up because I was watching it in Japanese. Its broadest theme is an opposition between science as a servant of mankind and science as something that will challenge and change mankind. It is particularly interesting because it does not fully resolve that conflict. Although, broadly speaking, the baddies are those who see science as something that should challenge and change us and the goodies are those who want to tame it, the plot is contrived to leave the question hanging. It is thought provoking for that reason. 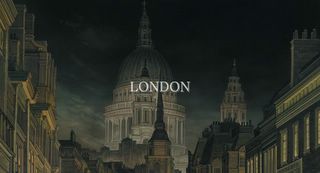 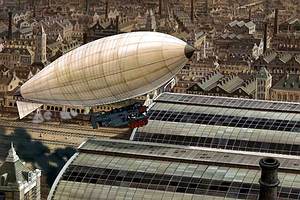 But what really struck me about the film was its portrayal of England. This isn't really its main theme for a Japanese audience - it just happens to be set in Victorian England at the time of the Great Exhibition - but, for the English viewer used to Hollywood ridicule and English self-parody, the portrayal is fascinating because it is so uncringeworthy.

"Steamboy" is not alone in this. It is set in Manchester and London in the industrial revolution but it reminded me a lot of "Laputa", an animated film by the legendary Hayao Miyazaki set in the mining villages of South Wales. The first thing to say is these films do tend to do their research. Given that they are largely written for a far east Asian market, it is amazing how few clangers are dropped. For viewers used to Hollywood's carelessness with Englishness, it is refreshing to catch a fleeting glimpse in Steamboy's first Manchester scenes of the "Rovers Return" pub.

It goes a bit deeper than that. Though it sounds funny to say it, a subgenre of Japanese anime film seems to have found a popular idiom for depicting English history that is a hell of a lot more interesting than American movies obsessed with stiff upper lip and the medieval or British flicks preoccupied with class and frilly costumes. Both Laputa and Steamboy locate the really internationally significant point of British history as being the industrial revolution and enthusiastically immerse their plots in hisses of steam, oily cogs and the exhilaration of technology. The appeal of this to a particular generation of Japanese man probably has nothing to do with a deep appreciation of British industrial history, but it is nice to be squinting rather than wincing when your country is the subject of a foreign film.

It features a technologically fixated megalomanic baddy called "Eddie". Here is a trailer. 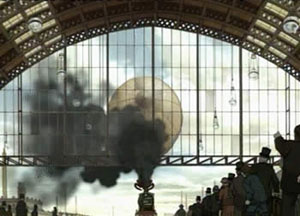 By the way, as usual when a headline asks a question, the answer to "Do the Japanese understand Englishness better than the English?" is "Probably not". Try it with newspaper headlines, you'll find "Probably not" is usually the best fit. "Is Elvis alive?" "Is the moon made of cheese?"