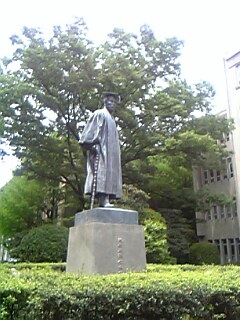 The rather stern looking founder of Waseda University, Okuma Shigenobu

On Saturday, A. had a study group to attend at Waseda University. I went along with her. While she was working, I nosed around Waseda, which is both a district of Tokyo and the home of the well known Uni. It is full of second hand bookshops and shabby cheap restaurants.

You wouldn't describe the university itself as beautiful, although it is pleasant enough, but it does have that feel of raw energy that some places have. Every railing is covered in posters for some club or society or other. One noticeboard was smothered in surreal photos taken by some over zealous student of his girlfriend. There was extracurricular activity everywhere. (A. says Waseda is famous for this.)

In one of the university's squares, I came across four students practicing a modern drama piece. When they were not in quiet and earnest discussion about their choreography, they were bellowing out their lines across the campus (video may take some time to load). It seemed to be the most normal thing in the world. Even the security guard helping a bus reverse into the square didn't bat an eyelid.
Posted by Nonjatta at 11:12 am