Daily Yamazaki is our local convenience store. Today, I decided to test the surprisingness of Mr Yamazaki's bread.

Japanese bread prides itself on its surprisingness, in fact surprisingness is its most important quality. To my taste, the bread itself is usually a little bit sweet. The crust is usually not crusty enough. The dough is often too doughy. But that, of course, is not the point. The Japanese baker aims for something higher, something deeper. He deals not in flours or yeasts, but in ideas and philosophies. Whereas the English baker might concern himself with what heat the loaf should put in the oven or how much air should be in the dough, the Japanese baker is focused on lightness of thought, on the unexpected turn of mind, on the ironic twist. Surprisingness is always the aim.

So, George and I went to Mr Yamazaki's to test whether his bread came up to scratch. 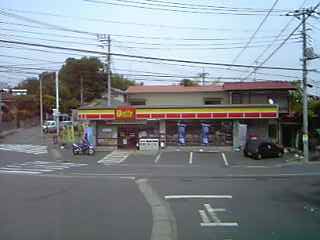 We bought a random selection of breads from Mr Yamazaki's counter (see below). They included a dubious looking doughnut like thing, an unsightly yellowy/greenish roll, a more reliable looking sesame topped bun, a plain roll, and a baguette. 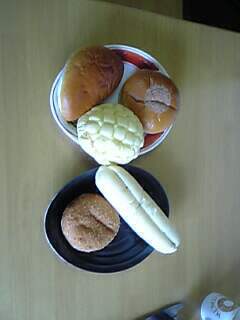 We returned home and the tests began. First, I tried the dubious doughnut. It looked as if it might have a surprise in store.... 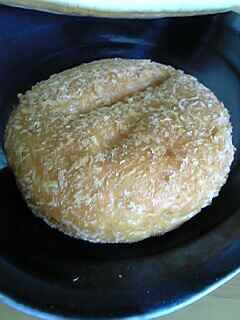 ... and it did not disappoint. Sliced down the middle, a hidden stash of curry was found in its innards. A spicy surprise indeed! Mr Yamazaki would have been proud. 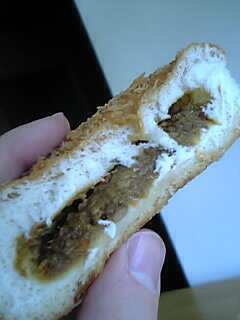 Next, the unsightly yellow thing. 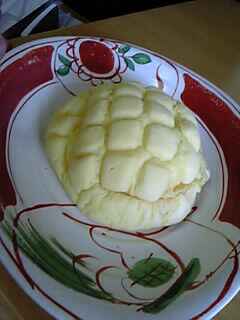 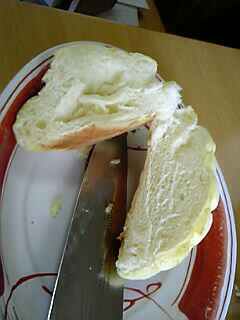 Sliced in half, you might have been forgiven for concluding that the baker of this morsel had been having an off day. No slab of curry presented itself. On very close inspection, however, I eventually discovered a narrow seam of something white and gloopy hidden in the white flesh of the bread. Ah ha! A bite of the bun and the conclusion became inescapable. It was Meron Pan (melon bread)， a completely melon tasting roll with a seam of melon butter to complete its ambush on the tastebuds.

The two more suspicious looking breads were out of the way. The others looked more normal. However, I couldn't help feeling a sense of foreboding as I moved on to the sesame topped bun. An altogether more stout and reliable fellow, this one. Or was he? 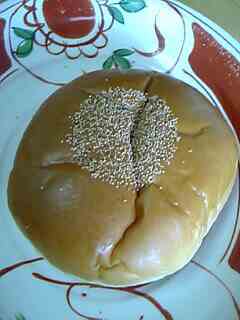 No he most definitely was not. His was that most classic of Japanese bread surprises: the anpan assault. An, for the ininitiated, is a very sweet paste made of crushed beans with a very singular texture: 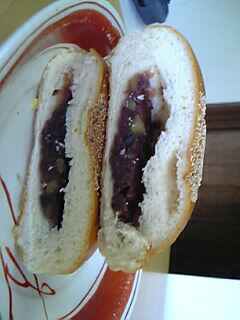 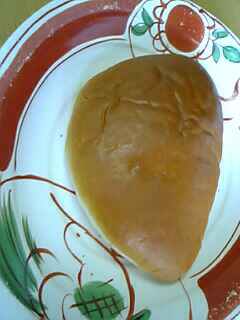 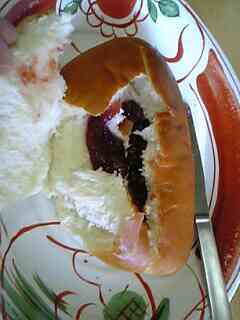 And, finally, the baguette, that most iconic of breads. 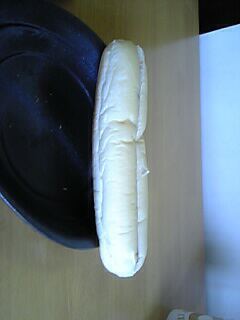 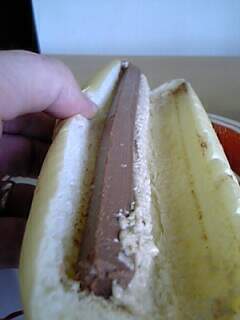 That's five out of five for Mr Yamazaki in the surpringness stakes, plus a bonus point for the chocolate filled baguette. A masterpiece!

I suppose that is a very long winded way of explaining why A. and I have bought a bread maker.

Knew all along my instincts were right - go for the known and leave the surprises for others!

I really miss An-pan, Kare-pan and Melon Pan...(+_+). Today@s log is agonising torture!!
I could not help but having apple crumble.

Meanwhile have you ever seen "Anpan-man"?

I have heard of anpan man but not sure I know exactly who/what he is.

I'm sorry for torturing some of my readers. It makes me feel even guiltier that I had to throw away the baguete because it simply wasn't possible for me to eat it. I quite liked the Kare pan.

Well, well. Kare pan has a bit of history. It was created during Taisho period in Ginza. Explains why it tastes better compared to other mongrels.

What is the Taisho period and Ginza?

In any case, people cannot normally eat 6 breads at once!

that is, unless you are kuri.

Ginza is a district of Tokyo. It was known as the most westernised part of Tokyo in the early modernisation period (after 1868) full of bright lights and dodgy cafe waitresses. The Taisho period dates, I think, between 1912 and 1926. It is also a period of modernisation and relative democratisation.