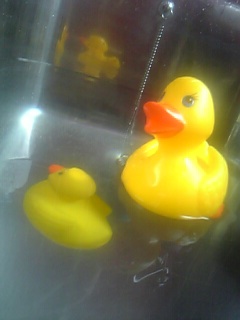 I was sitting in my ofuro this morning, thinking important thoughts, but became rather distracted by the wonkiness of my duck.

I own two rubber ducks (or rather G. does). The big mother duck has always been a fine upstanding bird and has never caused even a moment's bother. Her offspring, however, has been a constant source of worry. Every time you put the little fella in the water, he immediately keeled over. I'm afraid I had rather written him off as a having a congenital defect: a head far too big for his little body.

But, this morning, sitting in my ofuro, I made an amazing discovery. If you filled him almost full of water, with only a bit of air in his head, he was perfectly steady... floating under the water's surface. He was a submariner!

I jumped out of my ofuro much cheered at having a full duck force after all!

The question is, after only a month and a half in Japan, has the tipping point been reached?
Posted by Nonjatta at 9:20 am

Make sure you empty him after each underwater adventure or you will have a mouldy duck. One of mine went that way!

Missed this one 'till now - perhaps a good thing as it seems you might indeed be keeling over like the little duck!