I haven't posted for a few days because of the "Inoue hangover". But more of that later.

On Sunday, A., G. and I took a trip into Tokyo to see A.'s dad's painting. A couple of years ago, A. and her sisters bought him an oil painting set for his retirement pressie. They were under the impression that he had been quite an avid painter as a young man. Apparently, this was a wrong impression but A.'s dad has got seriously into it anyway.

In fact, he is currently having one of his paintings exhibited at the "Shinkozosha Ten", one of the oldest Western style art exhibitions in Japan. It is half made up of professional work and half amateur and takes over most of the Tokyo Metropolitan Museum in Ueno Park. 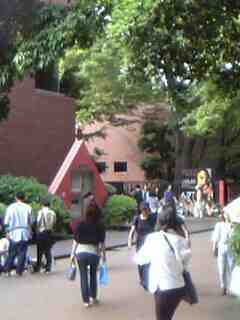 A.'s dad was just made an associate member of the society (which translates as the New Structuralist Society, but seems to include everything from photography to abstract work). It seems to have been considered a very rapid promotion. He is one of those annoyingly talented people. Here is G. appraising his grandfather's work: 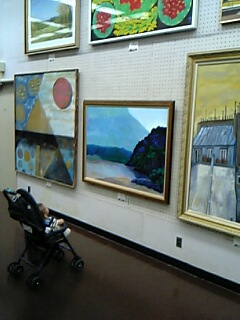 After our trip to Tokyo, A. and I were expecting a quiet night in but, when we got to our street, we found our neighbours had set up an impromptu street party. Actually, that probably gives the wrong impression. It was really more of a private party that had taken over the street. They were all sitting around a barbeque in the middle of the road. These people are the Inoues and the best way of describing them to English readers is that they have a slight touch of the Boswells from the situation comedy Bread about them. I don't have a picture of the Inoues, so you will just have to do a bit of cross-cultural translation: 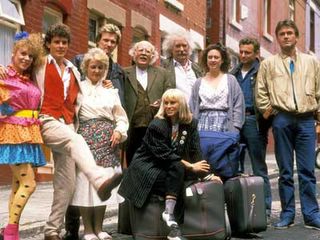 They are a fun loving family who are known around here as the godfathers of the local matsuri (festival). I found them to be very friendly. They plied us with beer and shochu (the Japanese equivalent of vodka) all night. It was not very clear what the reason for the party was (A. seemed to be under the impression that this was quite a regular occurence) but their daughter had just had a child. Everybody was cooing. The daughter's husband was a really nice bloke who tried very hard to make me feel at home sitting on a cushion in the middle of the road at the end of my street.

Anyway, I had a stonking hangover on Monday and didn't really feel up to posting. Yobu has a new post up as well, for those Yobuites among you.
Posted by Nonjatta at 7:56 am

Isn't he a bit precocious?

So,you got to know the Inoue family. Aeren't they nice ?They do look a bit like YKUZA, though.
For me, they personify the ideal family: no money, no education, no goals, they just live the moment. And they love each other.They are very considerate towars one another.And the pairents and child share the same value systm.
But be careful! Don't let them teach you Japanese! Their Japanese appalls most peaple,including me.
って、ここまで英語で書くのにすっごく時間がかかっちゃったよ。そしたら、梅子ちゃん日本語で書いてるし。