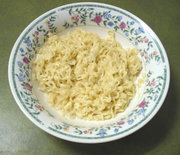 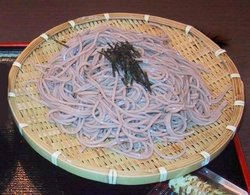 First, an introduction to the world of Japanese noodles. There are three main types: fat, medium and thin. The distinction is much more complicated really, but that is how I remember it. Big, fat and gloopy is "udon" (right). Medium is "soba" (centre). Thin and wriggly is "ramen" (left).

This is a post about ramen. One of A.'s students, who is Chinese, is writing an essay about a rather curious cross-cultural phenomenon associated with this particular type of noodle: it is stateless! In Japan it is seen as Chinese. But in China it is Japanese.

Ramen is relatively new to Japanese cuisine. It only became widely known in the late 19th century, after Japan opened itself to modernisation. Though also originally from China, udon and soba had been around for hundreds of years. "Ramen" is generally thought to be a Japanised version of a Chinese phrase "la mian", meaning hand pulled noodles and, in the early years of modernisation, was called shina-soba or "Chinese soba" (incidentally "shina" is now politically incorrect in Japan because of its associations with the pre-war colonial period). Chinese immigrants used to sell it from carts in the big cities and it was a popular dish in Yokohama's Chinatown.

However, it was never a truly mass market food. It was not until after the war and a combination of cheap imported US flour and the return of tens of thousands of Japanese from China that it began to establish itself. The real turning point was in 1958 when instant noodles were invented. Ramen hit the big time.

That, then, is the Japanese side of the story. As you can see, Ramen is seen as new fangled and is closely associated with its Chinese roots.

But A.'s student says that "Ramen" is now being reimported into China as a quintessentially Japanese product. This may be a specifically southern Chinese perception, because they know their noodles better in the North, but she says people are prepared to pay three or four times the price for "Japanese Ramen" than native noodles. This is rather strange because a noodle restaurant in China would normally make noodles fresh for the customer while "Japanese Ramen" are really just fast food. I suppose it is just another version of the "McDonalds" phenomenon. Here is a Chinese English language newspaper review of a "Japanese Ramen" restaurant. And a media story, reposted on a blog, about a ramen restaurant keeping a low profile during the recent anti-Japanese protests in China.
Posted by Nonjatta at 9:35 pm

Meanwhile, you should try "Sanuki-udon"!!

I will try sanuki udon