The rubbish may be rubbish but the baths are bathalicious 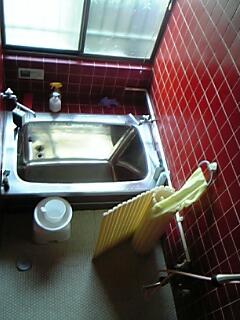 After an early morning spent at the waste disposal centre, the stressed housewife can retire to the "o-furo" for a nice relaxing soak.

The "o-furo", or bath, is a bit of an institution in Japan. In fact, bathing has been central to Japanese culture for hundreds of years. Back when Europeans preferred an earthier perfume, the Japanese sentou or public bath had a similar social function to the English pub: a meeting place where you could pass the soap to your neighbours, have a game of Japanese chess, or just a good chinwag with your mates. The Japanese phrase "hadaka no tsukiai" literally means naked companionship, but is an idiom for a friendship where nothing is hidden. In the period before modernisation (pre-1867), Tokyo had about 600 sentou within the city limits. In 1964, there were 23,000 nationwide. That has now declined to fewer than 10,000, mainly because of the increase in the number of o-furo in private homes. You tend to find older people if you visit a sentou nowadays, which is a bit sad. Like the decline of the traditional English local, I suppose. 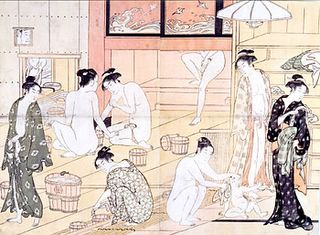 What has survived, however, are the rituals of bathing. You must not enter the bath proper without first washing yourself thoroughly. This is a bit counter intuitive at first but the logic is clear if you are going to be sharing the water with others in a public setting. In Japanese homes, it is still usual for the water to be covered after use (with that white rolled-up thing on the right of the picture) and used by other members of the family. Anyway, you sit on the little stool (bottom left) and thoroughly soap yourself in the tiled area outside the bath. You then shower it all off (the whole room is tiled, like an enormous shower) and, clean as a cucumber, you plunge into your bath. The tub is deep. The water is piping hot. The washing is over. So, all you can do is relaaaaax.

For the true bathaholic, there is always the onsen to be visited, but that is another story.
Posted by Nonjatta at 11:18 am

If you go to a "super-sentou," a postmodern form of Japanese public bath (?!), you will find things are quite different from what is traditional.

It doesn't look big enough for a big lig like you

Will have to go postmodern sometime.

There is one postmodern sento that my mum loves near our house and nitori.