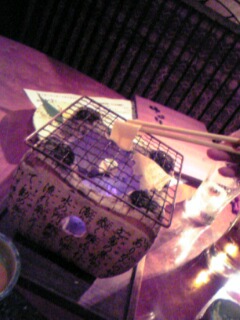 This is a bit late but A.'s mum looked after G. on my birthday on Monday, so A. and I were able to have a day out together. We went to Tokyo, where A.'s dad treated us to some fantastic tempura at the Prince Hotel. Very swish indeed. We arrived just after lunch so the tempura chef was cooking just for us. It came straight from his pan onto our plates. Yum!

In the evening, after a bit of shopping for E. and H.'s wedding present, we returned to Hiratsuka and A. and I had an evening out together. We were so full up we decided to drop the restaurant plan and went to an isakaya (the nearest Japanese equivalent to a pub) instead. Aya was kind enough to order swordfish wings (see pic above) to go with my beer. An acquired taste, but I think I acquired it eventually. The isakaya was called "Yururi", which has a connotation of taking it easy. It was pretty funky. We went there with E. during the World Cup. You get a little private room to yourself. We were in one suspended from the ceiling in the far corner. The place was buzzing with drunken conversation but we were in this little sequestered spot munching our swordfish wings. 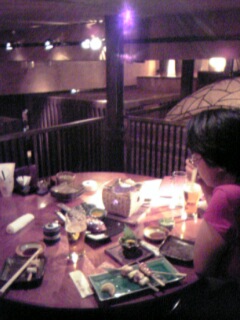 On Tuesday, just to make sure that belly of mine didn't get too small, we went to a ramen shop called Ichiryu with G. and A.'s mum and dad. Delicious. 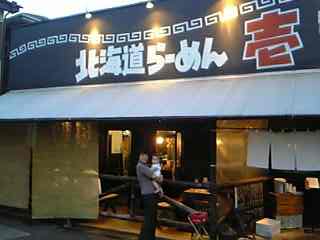 I can't resist a little addition to my recent ramen rant. The sign in the picture above says "Hokkaido ramen", a reference to Japan's northern island. From my limited exposure, it seems there are often references to Hokkaido in Japanese ramen restaurant signs. Hokkaido ramen is a type of ramen, using miso, but Hokkaido is more generally associated with revolutionising the eating of ramen in the 60s or 70s. Hokkaido ramen added all kinds of funny ingredients, like butter and sweetcorn, to the more "traditional" and staid ramen types. A.'s says her dad remembers a wave of popularity for this new fangled ramen when he was young. It is Japanese ramen's free and transgressive use of all sorts of ingredients that is part of its appeal in China right now.

It would be interesting to look at representations of Hokkaido in Japanese culture more generally. Hokkaido itself might be seen a bit like America is to Europe: it was essentially a colony where the native population were annihilated and where all kinds of people from all over Japan mixed. Lots of mixed up and exciting things came out of the mixture. In Wild Sheep Chase, Haruki Murakami's Hokkaido is very "other".
Posted by Nonjatta at 12:11 pm

I will do some looking into this rage, but Aya says they have been around a while and are a kind of bitter cordial that is good in the height of summer???????