A mountain to climb 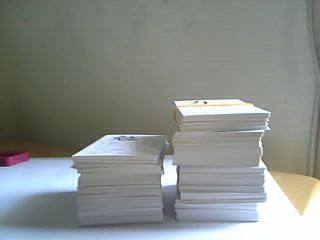 I've been studying my japanese characters ("kanji") today. Someone once said that trying to learn Japanese was rather like climbing Mount Fuji. Unlike some other languages, the gradient gets steeper the further into the climb you get. I hope it doesn't get too much more severe!

To extend the metaphor, I am just setting off on foot from Hiratsuka on my climb of Mount Fuji. I've got a hell of a lot of hills to climb before I even get to the main mountain but already I'm feeling pretty exhausted. The pic above shows two piles totalling 440 basic kanji cards. The pile to the left shows the number I have covered so far. Of course, the more I learn, the more difficult it gets to hold them in my head. In total, there are more than 2,000 kanji plus the 90 odd characters in the two alphabets to master if you want a basic ability to read a newspaper. (You could spend your whole life learning kanji. There are many more than 2,000 out there.)

By the way, when I say I've "covered" these kanji, I don't mean I have learned them. If I was asked to write some of the characters in the left pile I would have real problems. I am trying to learn how to write them as I go along, because I don't want to climb this mountain twice, but it is tough to recall the stroke orders. Also, each kanji has numerous pronunciations and compounds which allow it to spell out words.

What I mean by "covered" is that I have learned one of each kanji's usages and could recognise it if I saw it in some text. The pic to the right shows the two kanji cards for the characters which make up the word "kanji". 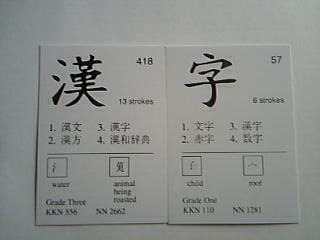 Some Kanji are complete nightmares. Like this one, for instance: 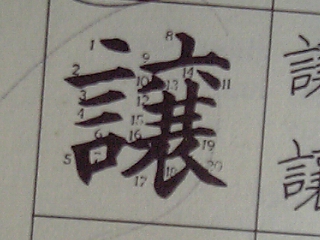 A. kindly picked it for the first kanji in G.'s name. Arrggggh!

How do you think Mr Picken would have tackled teaching this stuff? I'm sure he would have had an easy way of helping you memorise them!

Who is Mr Picken?

Probably a senior moment - was referring to the one who so imaginatively inducted you into the intricacies of the French language...what was his name?

The kanji A-san "kindly" picked up is actually one of the most complicated ones. Not all Japanese can write it properly,
I think.
The kanjis for A-san's name are much simpler. But those for my sirname are the simplest, which I guess you've already covered.

Kolay gelsin!(= a kind of "Good luck!" in Turkish)

I remember now! With the "bonker" ball which he used to throw at inattentive students. What a start he gave me in Francais. I rather liked him. I think he as Ms. Portnell were the start of me getting some confidence at school.