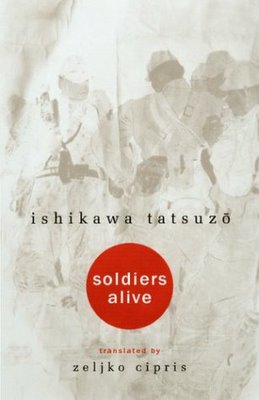 This morning I was reading the introduction to "Soldiers Alive

", a brutally plain speaking novel by Ishikawa Tatsuzou about Japan's war in China. The book was banned by the Japanese government in 1938.

"Down with Japanese Imperialism!"

The ubiquitous slogan, its eight characters reading 'Datou Nippon teikokushugi!' in Japanese, greeted Japan's troops and civilians wherever they moved in China. Although this slogan and others like it, painted on countless walls, clearly and loudly expressed Chinese outrage and protest, Japanese correspondents and other writers reported them freely, seldom adding any comment because none was needed. The charge of imperialism struck most Japanese as absurd, merely demonstrating how ignorant and misled the Chinese were concerning Japanese actions and motivations. The charge contradicted the official narrative, that of Japan's benevolence, and could thus be silently dismissed.

Although the horrendous war unleased by Japan against China seemed to be a clear-cut manifestation of imperialism at its most vicious, Japanese statesmen, soldiers and sundry commentators did not see it that way at all. Japan's mission, they publicly insisted, was not a quest for wealth or power, but rather a moral crusade for freedom, peace, and justice. Goodness was at work, not greed. As a Japanese editorial of the late 1930s phrased it, "Our responsibility is not conquest of the world; it is the emancipation of the world".

Why does that ring a little bell in my head?
Posted by Nonjatta at 10:22 am

I shall look for it when I have a chance.