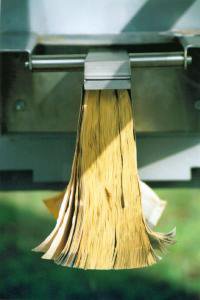 There is quite a lot that is mesmerising about Google Print and similar projects [1,2,3] but nothing quite so potentially revolutionary as a development reported in the New York Times yesterday: that they are developing a system to allow us to buy online access to any page or section of a book.

For those who do not have the faintest idea what I am rabbiting on about, Google Print etc. are scanning in millions of pages of books onto their servers so that we can search not only the internet but the entire sum of human knowledge when we go to our favourite search engine. There was a flurry of news reporting of this over the past few days [1,2] but it was this article in the New York Times that really moved the story on quite significantly. Up to now, all that the projects have been talking about is simply scanning in books and making them available to searchers. Except for at Amazon, where you can buy the whole book, there has been no way to pay for the content found in the search. Which basically meant either that the books had to be be out of copyright or that access had to be severely limited so that people couldn't pirate the content. The following idea is, as I say, revolutionary:

Amazon.com and Google are both developing systems to allow consumers to purchase online access to any page, section or chapter of a book.

[Readers will be able to] buy and download parts of individual books for their own use through their computers rather than trek to a store or receive them by mail. Consumers could purchase a single recipe from a cookbook, for example, or a chapter on rebuilding a car engine from a repair manual.

The good old book is going to be pulled apart at its stitching! It's like being able to go to the library with a pair of scissors and chop out the encyclopedia entry on "Siberian Winter Pantyhose" and cart it home!

Several initial thoughts come to mind. What is this going to do to writing? Won't there be a massive temptation for somebody writing a big boring history of "Industrial Decline in Siberia 1991-2005" to include a salacious page on "Siberian Winter Pantyhose" just to grab a bit of revenue from the passing Google trade? Seriously though, isn't this going to massively increase the availability of academic writing to the casual reader and will the fact that the casual reader might become a significant income stream not have an impact on the way academic writing and publishing is approached? It seems to me that the major barriers to general readership of many academic journal articles is simply their inaccessibility. The major barrier to general reading of some of the larger academic tomes is their formidable size, their hardbacks and their price. Won't this start to break down those barriers? Even if the readership were to stay largely specialist, won't this make the economics of academic publishing more viable? Those are just a few thoughts about academic and, I suppose, other specialist book publishing but surely this change is going to make its presence felt across the whole spectrum of book publishing.
Posted by Nonjatta at 10:40 am