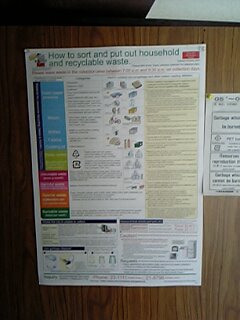 Shortly after arriving in Japan, I whined about the gomi (waste) disposal system here in Japan. To remind you, in our house we have to have six different rubbish receptacles and there are four different days a week on which we take the various types of rubbish to the communal waste disposal area. The New York Times has covered the ridiculousness of it.

Anyway, as with all things, one eventually gets used to life as an outsourced rubbish sorter. I have begun to take for granted the small rubbish disposal facility taking over a large part of our kitchen. One thing still plagues me though: the ineffable fear of a "category mistake". You see, if you put the wrong type of rubbish in the wrong category of waste the bin men will refuse (ho!ho!) to collect it. It will just sit there forever at the collection spot or until the errant householder becomes shamed enough to take it back again and attempt a recategorisation.

And yet, without taking a PhD in Gomi Categorisation, there are so many objects that I have no idea how to categorise. At least once a day I find myself taking a fearful blind guess at whether some anomalous object is "purakuru" (recycleable plastic), moeru gomi (burnable rubbish), moenai gomi (unburnable rubbish) etc. etc.. What the hell is an earbud, for instance? There is a burnable cottony substance and some distinctly burnable looking ear wax on it but then a plastic stick! There doesn't seem to be much logic to it. It is more like learning the catechism. For instance, cassette tapes and nappies are both considered burnable whereas a cotton futon is non burnable.

Anyway, today's category dilemma was over Doraemon. He went into recycleable plastic but I fear he may be waiting at the collection point a long time. He is a pencil top made of a kind of rubbery substance. 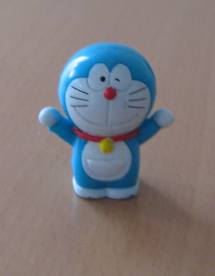