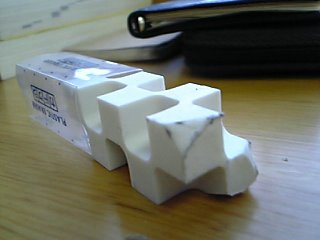 This formidable looking object is the "Kadokeshi".

Basically, it is a very elaborately designed rubber (eraser). The idea is that what one always hankers for in a rubber is a nice sharp corner to rub with. Your average rubber has a measly eight of these. The Kadokeshi has a mighty 28! That's rubber heaven!

Despite never having a major advertising campaign, the Kadokeshi, which literally means "cornereraser", has grabbed a massive chunk of the market here in Japan since it was released two years ago. Every stationery shop carries the things. But hold on a minute! Does the Kadokeshi really work? I took mine out for some field trials (in my kanji writing notework, a very demanding environment for any rubber) and found that a common old plastic eraser easily outperformed it in the rubbing stakes. As for the Kadokeshi's multifarious corners, the only ones that were really any use where the same old eight you get on any rubber. The other inside angles were obstructed.

What does this tell us? Maybe that I am scraping the bottom of the barrel of things to blog about. Maybe that it doesn't take much to win a major product design prize or to get exhibited at the Museum of Modern Art as a "masterpiece" of industrial design. But maybe also that good product design is not always about making something that works, but sometimes about making a product that has some kind of story to go with it. Basically, the Kadokeshi design took the boring old rubber and gave it a narrative. Whether it works or not, people have been talking about it (I am and here and here and here). That has helped it sell in its millions with very little advertising behind it.

Which got me thinking. Why shouldn't I grab myself some of the action? Buyo readers are privileged to get a sneak preview of just a few pages from the secret sketchbooks that will make me a millionaire

1. Ever used a pencil and thought： "God! This pencil is so blunt! What I need is a nice sharp new point"？ Look no further than the KADOPENCILTM (patent pending): 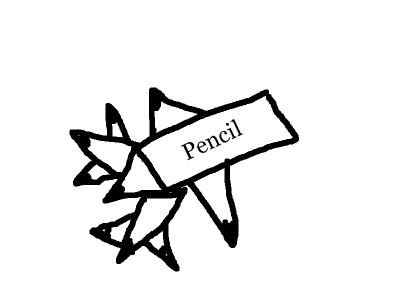 2. Ever laid awake at night on a hot, sweaty pillow wishing that you could find that cool fabric that soothed you when you first put your head down. The KADOPILLOWTM (patent pending) is the product you have been waiting for all your life: 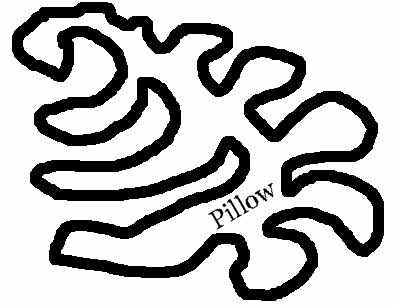 And just wait until I roll out the KADOTOILETTISSUE TM (patent pending)!

Woooohooo! I'm going to be rich beyond my wildest dreams!
Posted by Nonjatta at 7:13 pm

The derivative possibilities are, indeed endless, although I am still trying to get a grasp of the Kadotoilettissue - patent pending or not!

Actually, the problem of where exactly to grasp it is the major design problem I am worked on in this early prototype phase.

I think you need to take a break from learning kanji - seems as though yu need a life my dear!!!!