On Cynicism and Samuel Johnson 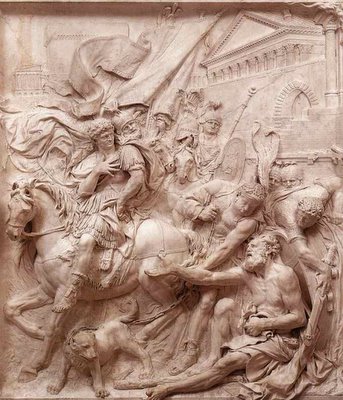 On Cynicism from the BBC series In Our Time.

We need more Cynicism. Early Greek Cynicism, especially. Bit like ancient punks only far more extreme (copulating in public!) and a bit more systematic in their thought. Was Jesus influenced profoundly by Cynicism? This program tentatively suggests that he may have been.

Cynicism attacked the idea that man is defined by his social context and status, insisting with Socrates that happiness is a life of virtuous self-sufficiency and adding that to achieve this you have to live in accordance with your nature as a rational animal. They said the mores and standards of human society are often at odds with human nature and we have to rid ourselves of these unnatural restrictions and desires. We have to live according to our simple natural desires: do what we want, where we want and whenever we want.

The method of Diogenes, the pioneering cynic, was to expound this philosophy not just in books and lectures but in real actions. That meant living in a barrel, acting like a dog, defecating and copulating in public. This was philosophy as a performance art.

One anecdote is that Alexander the Great visited Diogenes in his barrel. Alexander asked what do you want from me. Diogenes replied, "Stand aside so that I can see the sun". (see pic above.)

He seems to have been rather good at these kinds of quips. Another anecdote has it that, when captured by pirates and sold as a slave, he was asked his trade. He replied that he knew no trade but that of governing men and that he wished to be sold to a man who needed a master. Very Samuel Beckett.

But the quote that I found most interesting from this program connects with this idea of them rejecting civilised values. Looked at another way, that mean problematising the city and calling for a return to a more natural, less civic life. Angie Hobbs, lecturer in philosophy at the University of Warwick, says: "Diogenes and other cynics castigated the city, they castigated its mores and traditions and customs and yet they go on living in the cities. As far as we can tell they... make no serious attempt to try to reform these cities and of course you could argue that outrageous exhibitionism is nothing if it doesn't have an audience." This is something I have always wondered about groups in modern society who perform their rejection of society for the rest us. Why are they performing for us? I suppose in a strange kind of way they might be teachers too?

The evening podcast was about Samuel Johnson. One of the lesser known things about Johnson is that, when writing his famous dictionary, he used "an attic full of Scottish hacks" in his house to help him order the material. Nowadays, I suppose, he could have used a computer but that would not be as cool as keeping an attic full of Scotsmen. I might go down to Yamada Denki today and see if I can get one. It will probably be an attic full of Hokkaido men though.
Posted by Nonjatta at 12:05 pm