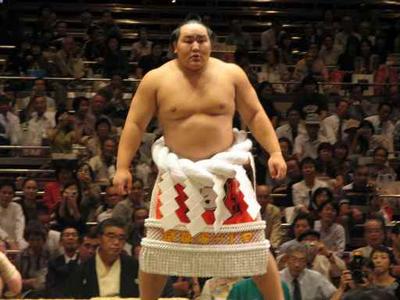 Today was the last day of the Autumn sumo tournament. It ended in fine style.

Mum, Dad, A. and I went to see to day six of the tournament at the Sumo Kokugikan in Tokyo. It was one of those once in a life time experiences. A.'s dad had got us superb seats. Included in the price of the all day ticket was as much food and drink as we could consume and we had an amazing view of the action, right down next to the Dohyo. My mum used to complain about these sumo posts on this blog but I think she was bowled over by the sport when she saw it with her own eyes. Both Mum and Dad ended the holiday religiously turning on the TV at 5pm everynight for the main bouts.

Anyway, today was the last day of the 15 day tournament. Two wrestlers went into it tied for the lead: my favourite, the Mongolian wrestler Asashoryu (above) and the up and coming Bulgarian Kotooshu (below). In recent years, Asashoryu has been the dominant force in Sumo but Kotooshu has started to put up a strong challenge over the last two tournaments. 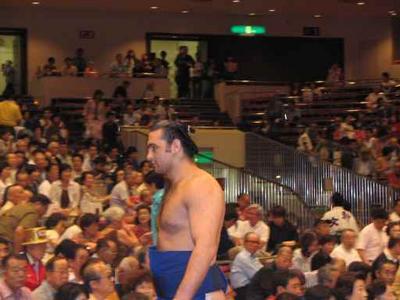 Anyway, these are the bouts that decided the tournament. Asashoryu and Kotooshu fought the two "ozekis", the highest ranked sumo wrestlers below Asashoryu's "Yokozuna" rank. Looks like Kotooshu will be promoted to ozeki soon:

That meant they had a showdown.
Posted by Nonjatta at 11:24 pm

I was bitterly disappointed with the eventual outcome...Kotooshu was robbed!

It was a fantastic Aki Basho. Kotooshu wasn't robbed. He wasn't ready. He'll make Ozeki after Kyushu, and will get his first Yusho soon enough. I want to see Asashoryu be the first to win all 6 Yusho in a calendar year (and be the first to get 7 in a row in the modern era).

I was at the Kokugikan on Day 11, when Aminishiki upset Asashoryu... that was painful.