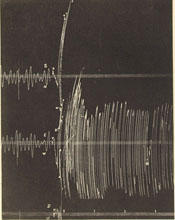 Today is the anniversary of the Great Kanto Earthquake on September 1, 1923. More than 100,000 people were killed. Among them was A.'s Grandma's sister, who was a young baby. A.'s grandfather was about the same age as George at the time and his parents' house collapsed on him. He only survived because a large column fell on a cupboard under which he had been crawling and created a pocket of safety.

Anyway, last night A. cooked some Imam Bayildi, a Turkish aubergine dish which translates as "the priest fainted", and decided to take some round to her grandparents this morning (the aubergines had come from their field). Her grandfather was rather astounded that his eldest grand daughter had at long last got into domesticity. A. wanted to put the Imam Bayildi in the fridge because it should be served chilled but her grandfather thought this was a rather more momentous event than that and immediately put it on the family altar, saying this was the day of the death of his wife 's sister in the earthquake and it was appropriate to dedicate this extraordinary beginning to her. 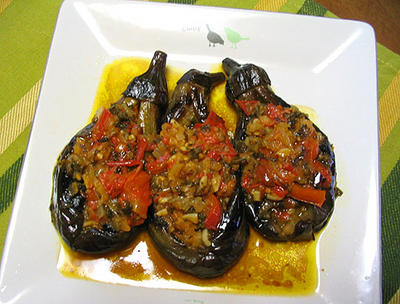 I use much, much less oil, though. And it still tastes lovely.

I am with Ayako's grandfather on this, it deserves real veneration - then to be eaten, mmmmm!!! No wonder the Imam fainted when presented with this gorgeous dish!