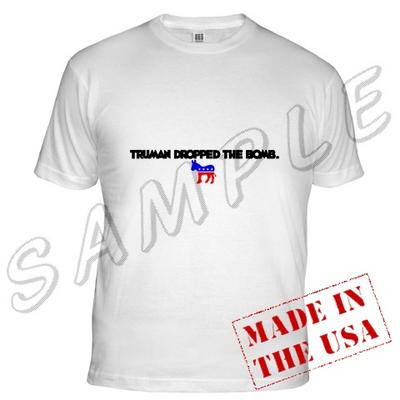 Just to show lunacy is not restricted to one side of the political spectrum, how about this disgusting example of degeneracy from Oliver Willis, who boastfully subtitles his site "Like Kryptonite to Stupid"? I think the t-shirt (which bears the slogan "Truman dropped the bomb", if you can't make it out) is designed as a piece of pro-Democrat party propaganda based on the twisted logic that killing more than 200,000 civilians is a tough thing to do and Truman, a Democrat, did it.

Whatever the rights and wrongs of the decisions to bomb Hiroshima and Nagasaki (as well as the almost comparably catastrophic civilian targeted firebombing raids on Japan), it shows remarkable stupidity to deal with such grave and destructive acts in the blithe manner Willis does.

I've thought of a couple of more digusting t-shirt slogans Mr Willis could add to his inventory:

Actually, it is hard to match the extraordinary boorishness of the original. Hats off then to Oliver "Like Manna to Stupid" Willis and a special commemorative t-shirt from someone on his own side of the political spectrum:

Update: Ron Brynaert has a sobering suggestion for Willis.
Posted by Nonjatta at 4:49 pm