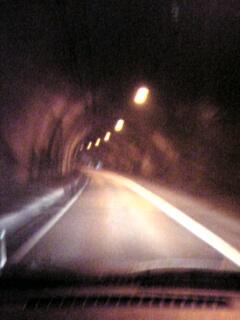 We drove over from Hiratsuka to Takayama yesterday. Takayama is where I lived when I was here ten years ago. It is a beautiful town in the mountains. For those of you who know it, we came in through Kiyomi and Nyukawa. They were not much changed.

Hiratsuka to Takayama takes about six hours by car. The last third of the journey is quite an education in civil engineering.It is not as though the first part isn't mountainous, but as you get to the centre of the main island you are dealing with hundreds of square miles of fairly formidable mountain ranges.

The road engineers here have burrowed an extraordinarily extensive network of roads straight through the sides of these mountains. There are literally hundreds of miles of tunnels,some stretching for ten or more kilometers, diving out into sunlight, and then nuzzling back underground.Some are new but some are old, narrow and dark. You feel like an automated mole driving through these endless warrens.

As we entered one of these tunnels, A. said "We've got Tanaka to thank for all of this." Tanaka is one of the two most famous Japanese post war Japanese prime ministers and his name is a byeword for corruption. But he also did some good. A. said he gave a really famous speech in which he said something like, "The tiniest hamlet in the furthest corner of this land must be able to get to the other corner. Some may ask where the money will come from but the money will come from having the gall to think such projects." (A. put on a really guttural accent because he was famously working class.)

Of course, he was right about the money following the infrastructure. I'm sure there was plenty of hubris involved and plenty of corruption but I couldn't help feeling as we drove through Tanaka's underground kingdom that I preferred politicians who got obsessed with grandiose civil engineering rather than vainglorious imperialism and militarism. That may sound very lefty of me (swords into ploughshares and all that) but of course Tanaka was very far from a lefty.

I empathise with your sentiments: it was bit the same with T.Dan Smith, albeit on a smaller scale. Whilst I wouldn't condone the methods, there were good outcomes for the NE (probably forms the foundation of the more recent successes in attracting funding etc.): uncharacteristically utilitarian of me,I know! It was the hypocritical murky dealings of national politicians like Maudling that really are to be reviled.
Good to hear Takayama has retained is charm - I would like to re-visit some time.

Nyukawa? I hope you stopped and bought some tomatoes. Please post as many pictures of Takayama as your blog and the rest of your readers can handle. I'm nostalgic for the place.

I thought that Tanaka-san was from Tokyo Electric....that's what it says in chapter 1 of 'Japanese for Busy People'...no mention of rpime ministers or tunnels!

Wait a minute, Kiyomi and Nyukawa are on opposite sides of Takayama. You must have been driving in circles. I guess we now know who was at the wheel.

We came in on the main highway through the mountains. maybe shokawa and nyukawa??? definitely recognised it as yours andandy's old territory rather than mine.