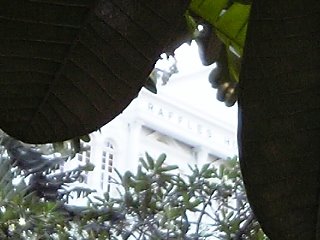 The Raffles Hotel, Singapore. One of those names with a load of baggage - a great dusty caravan of it borne along by a thousand native bearers, oxen carts, elephants and the odd moustachioed man in a sweaty red coat. I popped in on the way back to Japan yesterday.

After falling into a dribbling postwar dotage, the Raffles was renovated in the late 1980s. The shopping arcades that now swaddle it are standard international hotel stuff. A little regrettable. Mind you, it still has some class. When I presented myself at the Bar and Billiard Room for my Singapore Sling, I was quickly ushered away because I was wearing sandals. I have always followed the sound principle that I wouldn't want to join any club that would have me as a member anyway, so (after rejecting the Long Bar, which seemed to be filled with a most ill-favoured bunch of sandal wearing Billiard Room reject types) I humbly diverted to the delightful courtyard bar and had my Sling. Quite tasty. The picture is of the end of the cocktail after that, a little skew-whiff. 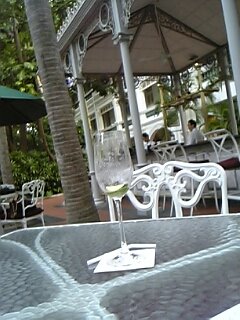 Sandals or no sandals I would have favoured the Courtyard Bar anyway!

I don't know about the 'sling' but the photo of the hotel (I assume) looks as though the photographer is flat on his back!