Nearly a year ago I wrote an entry about "Love and Locks", about how it has become a thing among couples to attach locks to Shonan Diara tower as testaments to their undying love.

Well, evidently, not all love is undying. G. and I were walking around Shonan Diara yesterday when I found this, just about chucking distance from the tower: 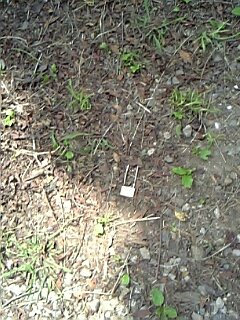 It had been opened with a key. Had one of them had kept the key and returned in hysterics months later after a cruel betrayal? Or had someone returned the very next night? Perhaps they had no wish for undying love with the previous night's partner? Maybe there is another lock on the tower for their true love? Or had the couple had an argument as they put the lock on? "No, not that way, that way, like that one" ... "Oh, bugger it. Damn your stupid lock anway!" (Hurls lock into the gloom). I kind of like the last couple. I'm sure their's will be an undying love.
Posted by Nonjatta at 8:00 am