Things you can do in seven minutes fifty seconds 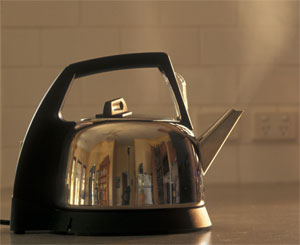 Theories about fundamental differences between Japan and England are mostly a load of cobblers. However, there is one difference between these two island nations I will accept:

It takes a hell of a lot longer to boil an electric kettle in Japan.

I just timed it. It took seven minutes and fifty seconds to boil one litre!

Things that can be done in seven minutes and fifty seconds

Actually, I've never tried that last one. Reckon it could be done though! So now you know, I am mostly sitting here on the other side of the world waiting for the kettle to boil.
Posted by Nonjatta at 9:16 pm

The voltage is lower in Japan. I wonder if that has anything to do with the time it takes the kettle to heat up. When I was in Japan I used to have to leave my electric razor plugged in all the time so that it would have enough juice to shave everyday. In Australia, where the voltage is way higher, I could only leave it plugged in for an hour and it would start to get dangerously warm. Here in Canada it's just right. It's a German razor. Go figure.

If you travel to Australia, take your kettle with you and see what happens.

The kettle will boil quicker if you don't watch it (or measure the time it takes). Somthing to do with Heisenberg's uncertainty principle, I think....

Aaaah! Is the uncertainty field stronger in Japan?