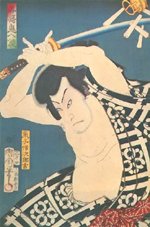 Nezumi Kozo, or Rat Boy, is a Japanese folk hero similar to Robin Hood. He seems to have been a real historical figure (in that sense a bit more like Dick Turpin, perhaps), a thief who lived in Tokyo at the start of the 19th century and became known for stealing from the rich samurai lords and giving to the poor.

He has had a strange afterlife. Because the Rat Boy was so good at getting into places, a superstition has built up that a piece of his grave is an excellent lucky charm for anyone wishing to gain entrance to anything, especially students taking entrance examinations. Which is the point of this post really. This popular belief might have been expected to cause a major headache for the keepers of Nezumi Kozo's grave, similar to the constantly disappearing Abbey Road and Penny Lane signs. So, what did the grave site people do? Ban people from entering? Put up dire warnings everywhere? CCTV? An armed guard maybe? Or has his grave been reduced to a few shavings of dust by now?

None of these. With admirable common sense they simply outfitted the grave with an extra stone for those desperate schoolkids to chip away at. I suppose guarding the grave of a famous thief inspired creative thinking.