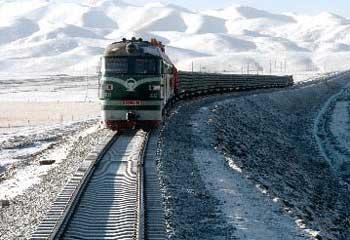 The travel writer Paul Theroux wrote in his book about seeing China by train: "The Kunlun Range is a guarantee that the railway will never get to Lhasa. That is probably a good thing. I thought I liked railways until I saw Tibet, and then I realised that I liked wilderness much more."

So far, it has received surprisingly little coverage in the Western media but one of the world's most extraordinary railway lines is nearing completion. It will do just what Theroux thought could never be done: connect the Tibetan capital Llasa with the rest of China. The line, to be opened next year, will be an amazing achievement. Passengers will travel in carriages with special high altitude enriched-oxygen supplies and UV-protected glass. The cars will be pulled by diesel engines capable of maintaining speeds of about 100 kph even above 4,000m, where the lack of oxygen in the air halves engine performance. The track will take travellers from China's bustling East Coast to Tibet in 48 hours and building it has meant scaling 4000m moutain passes, bridging massive ravines, and tunnelling through mountains at -30 C and in conditions where the least effort makes an oxygen bottle necessary. 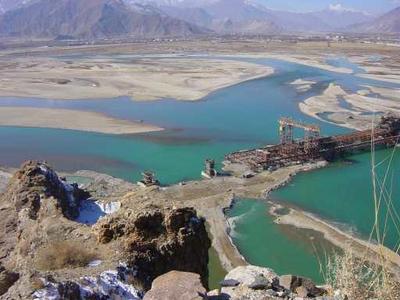 Engineering work on the Tibet railway

The Tibet railway is also deeply problematic. The main Chinese Government line on their invasion and occupation of Tibet has been that it is justified by the benefits of economic and social development that they are bringing to this "backward" region. This, interestingly, is exactly the same type of justification that Japan used when embarking on its colonial adventures in Asia before the last war. It was no doubt true that the Japanese brought economic modernisation to Manchuria. But was it right? This type of "modernisation" talk has been found in almost all colonial adventures and China's wonderful new railway is a symbol that colonialism and imperialism is as much part of our world as that of the first half of the 20th Century. The former Chinese leader Jiang Zemin said he had been advised that the Llasa railroad would not be commercially viable. He replied: "This is a political decision." 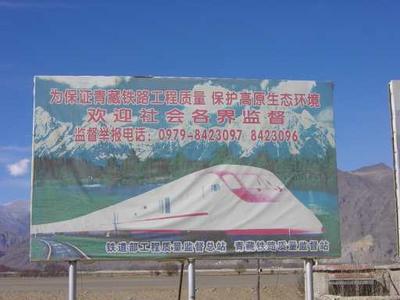 Nevertheless, all Governments, whether colonial or not, are judged partly on whether they improve the economic lot of the people. The question is whether this railway will be seen by Tibetans as being on the credit or debit side of the Chinese colonial rulers' record in Tibet. These things are never simple, there are always inequities in who benefits, and in Tibet the particular worry would be that Chinese immigrants might benefit much more than the indigenous people. I would be interested to see who actually is able to ride on this train but also what positive effects being linked by train to one of the most exciting economies in the world will have. There is a hint, in some of the Western criticism of this railway, of wanting to preserve the Tibetans in formaldehyde as untouched specimens of naive pre-modernism.

(Pictures from International Campaign for Tibet)
Posted by Nonjatta at 11:30 pm

Putting the politics aside this is a pretty staggering feat and a journey that I imagine would be breathtaking.

I think so. Would love to make the journey. Maybe that could be your next adventure?