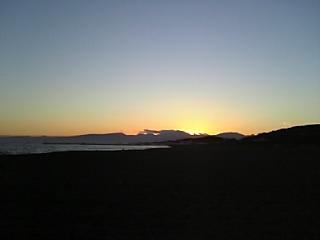 We went to the beach today. A. told a yarn:

There was a poor village on a small hill beside the sea.

The villagers made their living farming the narrow strip of infertile land between the water and the mountains. That year had been kind to them. It had been a good harvest. The whole village had worked flat out over the last few weeks to bring in the crop. The bails of rice were stacked in the fields around the village and everybody had gone down to the beach to get ready for the festival. The men and the more serious boys were trying to snag a few fish to help the festivities. The children kicked about in the surf and mothers chased the children. The village delinquents chatted up the girls who would inevitably marry the serious boys. There was a bit of an earth tremor, a mere rumour of a trouble far off. Hardly anybody noticed it such was the sense of release that the end of the harvest brought.

In those days, the Lord of the Manor was paid in rice by his tenants. He would receive his rent in the fullness of time, but today he just happened to be riding with some retainers on the road beside the village. He stopped his horse to enjoy the scene. He was chuckling to himself, quietly proud of the energy of his underlings frolicking on the sands, when one of his men pointed out a ridge of white on the horizon. A tsunami! All the villagers on the beach would surely be killed. But there was not enough time to send a messenger and the beach was too far away to shout. The villagers were doomed if they did not flee the beach quickly.

What did the Lord of the Manor do next?

He burned the rice in the fields beside the village.

Because the villagers would surely see the rice on fire and run back up to the village and try to stop the flames. Thus saving themselves. It is a kind of a Japanese King Solomon story.

I get it now - clever