Arrgh! They found me! 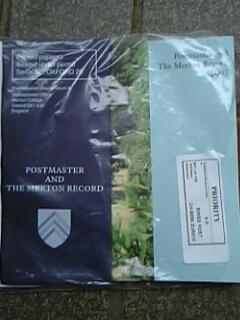 The only post in the letter box today was the "Postmaster and The Merton Record". What?!

For the majority of you who don't know what the hell I'm talking about: the "Postmaster" is my college's alumni magazine. It is published by the "Merton Development Office", a shadowy group who have made it their business to relentlessly track Merton's alumni across the globe and eventually, I suppose, squeeze some cash from them for the good old Alma Mater. Forget Mossad or the CIA, these MDO guys are the best in the business! I've been on the run from them ever since my graduation but I have never quite managed to shake them from my tail. I thought coming to Japan would do it, but no! Within half a year, they have somehow managed to find my address and despatch the compulsory "Postmaster". How do they do it?
Posted by Nonjatta at 7:11 pm

Just for the record it most certainly wasn't us who snitched on you!