How many racist voters are there still left in America? 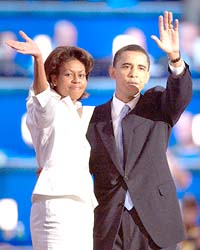 If there aren't as many racists as people think, this Barack Obama chap is a very fresh and exciting Presidential candidate.

He seems to be off the narrow, self defeating script that centrist politicians have written for themselves. He is not just charismatic, he seems to have a sharp brain and integrity. When much of the rest of America and Britain, including all the main Democrat Presidential candidates, were moving towards war in Iraq in 2002, Obama made this observation:

...even a successful war against Iraq will require a U.S. occupation of undetermined length, at undetermined cost, with undetermined consequences. I know that an invasion of Iraq without a clear rationale and without strong international support will only fan the flames of the Middle East, and encourage the worst, rather than best, impulses of the Arab world, and strengthen the recruitment arm of al-Qaeda.
More.

Does building a broad, non-partisan centrist bid for the US presidency have to just mean schmoozing Rupert Murdoch? Or can it mean doing something more exciting? This election in 2008 is very important and I would hate to see the Democrats getting carried away with some pet project, only to find America is not like what they want it to be, but, looking at Obama, I get a growing feeling that Hillary Clinton and Senator John Edwards, a Clintonesque politician and my previous favourite, are blasts from the past. Barack Obama has a couple of rather insignificant skeletons which he seems to be happy to take out of the closet and be honest about (experimenting with drugs and a small property deal with a shady developer).

America has a way of surprising the world, not only with its occasional stupidity and bigotry but also with extraordinary innovativeness, reinvention and audacity. If he does run for President, Barack will tell us something that I want to know about what America is.
Posted by Nonjatta at 10:21 am

Cool and inspiring but I think it is too soon for him.