God Save the Queen 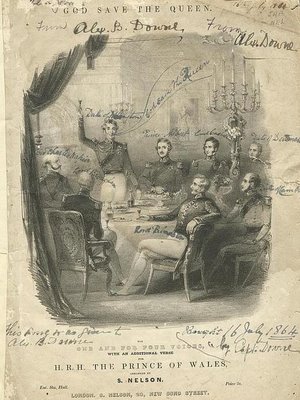 You know those times when you make some startling claim to someone and they are startled and then you start to wonder whether your startling claim was infact startling because it was totally untrue. Well, last week I told A's Dad that the UK national anthem was shared by another country. A.'s Dad was surprised, perhaps a little doubtful, so I looked it up today.

In fact, more than one state has shared the British National Anthem, and we're not just talking colonies. Liechtenstein is the country I was thinking of. When the English played Liechtenstein in a footy match a few years ago they had to play it twice. The German state also adopted the same tune between 1871 and 1918. Before that, the Prussians had used it. It was the official Russian national song between 1815 and 1833 and it has also been the melody to patriotic songs in the US (My Country, 'Tis of Thee"), Iceland, Switzerland and Sweden. It is Norway's Royal anthem. For example, here it is in Russian: "The Prayer of the Russians".

Strange that such a dirge-like tune should be so successful. Sounds better in that sexy Russian.
Posted by Nonjatta at 10:04 am

Speaking of colonies, here in Canada we recently celebrated Queen Victoria's birthday. It's a bank holiday. I'm not sure if it's celebrated anywhere else in the world. It makes for a nice spring long weekend.

Not celebrated in the UK. Sounds like a good idea to me.