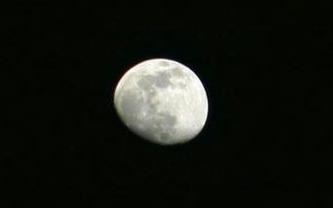 G. and I have taken to going outside at night and looking at the moon and the stars. He loves shouting their names: "moooon and pikapik".

I admit to being a little worried two days ago when, looking at the moon, he started howling. I mean, quite literally, howling like a wolfman. He had his head thrown back and everything. Yesterday, I went out half worrying that he was going to start sprouting hairs on his back, but the lupine diversion was forgotten. Instead, he made a repeated motion of reaching out to the moon, grabbing it and putting it in his mouth. To eat, presumably. Cheese or mochi?
Posted by Nonjatta at 9:56 am