The perils of cheap printer cartridges, or the horror of this "war on terror" 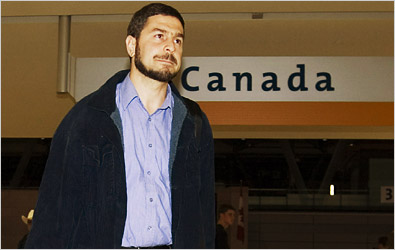 Maher Arar arriving at Ottawa airport from his home in British Columbia.

A completely innocent man. So why was he arrested by the FBI on the way back from a holiday, bundled off to Syria and repeatedly flogged with shredded metal cable while being kept in a tiny cell for a year?

Incompetent and morally degenerate security agencies, that's why. Could there be any worse description for the authorities in which the public entrusts its safety? And, by the way, Syria? Syria!

The chronology. The cartoon. Maher Arar's case is by no means a isolated example of this sort of thing.