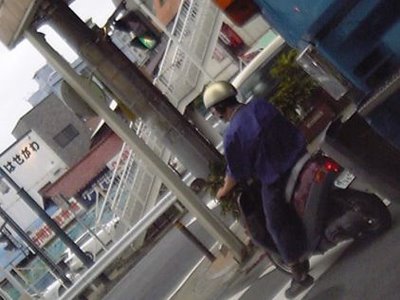 I was driving along and, as is my wont, slagging off fellow road users. This motorcyclist was a particular target: driving with his helmet on but with the chin strap undone.

"What an idiot," I chuntered to A. as the offending one zoomed into the rear view mirroｒ．"If he has a crash, that thing will fly off immediately and he will be dead and everybody else will have to deal with it."

"Don't criticise him without knowing anything about him," an umbraged A. replied . "You don't know, do you? He might be an idiot. But you don't know! He might have glued it onto his head permanently. That might be the way he goes about."

It was possible.
Posted by Nonjatta at 12:14 am