Those inefficient men in their flying machines 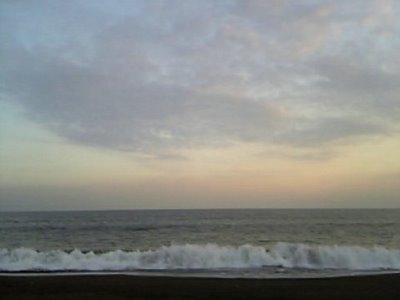 Went to the beach today to try to drill some Japanese verbs into my head. (I know! You are supposed to swim and surf and have fun!) Anyway, I was rather distracted by a man wearing a parachute and with a propellor engine attached to his back flying out to sea. I have looked up this strange behaviour on Wikipedia and apparently it is called powered paragliding. I had no idea such a thing existed! As someone who steps onto a jumbo jet with trepidation, I had a vague notion that there were certifiable types who enjoyed jumping off cliffs with only a bit of fabric to support them, but the notion of strapping a propellor to their arses to add a bit more thrill to proceedings completely blows my mind.

At first, I couldn't get a clear view of who the pilot was. He was taking off and landing about 100 metres from where I had parked myself but I couldn't make out his face. I kind of imagined a wild haired nutcase with an anorak and a deathwish.

Anyway, I think he saw me taking videos of his flights because he flew directly over me and waved down at his uncomprehending, groundlubbing admirer. He was quite different from what I had expected: he was, in fact, a dashing young man with a square jaw, just like you might imagine one of those pre-WWI pilots would look like. My mind may be playing tricks on me but I'm pretty sure he even had a moustache. Chocks away! Here he is flying and, later, having an Icarus moment. (Or was that my camera?)

The connection is a bit tenuous but somehow all this flying got me thinking about UFOs and then about our civilisation's technological foundations. I'm not sure this thought will really work as a blog post but here goes:

There have been some quite serious attempts by scientists to find intelligent life on other planets. This has meant searching the universe for radio and other transmissions that might be signs of technologically advanced life. So far, after decades of searching, nothing has been found to definitely point to such a civilisation. Which is kind of worrying because, if you look at our very young civilisation's technological trajectory, which has brought exponential improvements in our capabilities, it wouldn't take long in galactic terms for any technological civilisation to get off its home planet, on to a whole load of other planets and, basically, propagate itself fairly widely. Given that the universe is rather a large place with, presumably, a good few planets with a fair likelihood of creating life, you would expect that we would find it rather easy to find technologically advanced fellows in other parts of the universe.

That far I got myself but, after searching on the Internet, I find a worrying answer to my half formed seaside thought. Apparently, the idea is a poor version of a paradox proposed by the physicist Enrico Fermi. One of the answers to the paradox is to question the silent premise of my thinking, ie. that intelligent life, once it has evolved, stays around. If, on the other hand, technological life is an unstable state, which develops exponentially but somehow contains the seeds of its own very fast destruction within it, then there is no paradox between the rarity of evidence of technological life in the universe and the apparent likelihood of finding it. Technologically advanced life may be much more common than we think, the Earth not half so singular, but it may also be a hell of a lot more temporary than we like to believe. This from Wikipedia:

Life on Earth, and intelligent life on Earth, evolved as a result of the competition for scarce resources. The evolutionary psychology that developed during this struggle has left its mark on our characters, and left human beings subject to involuntary, instinctual drives to consume resources and to breed. It seems likely that intelligent life on other planets evolved subject to similar constraints, and as such pessimism about their long term viability is a justifiable position.Technological civilizations may usually or invariably destroy themselves (via nuclear war, biological warfare, grey goo, or in a Malthusian catastrophe after destroying their planet's ecosphere) before or shortly after developing radio or spaceflight technology. This general theme is explored in The Mote in God's Eye by Larry Niven and Jerry Pournelle, which has as its central premise a civilisation that overtaxes its resource base and cyclically self-destructs, but which tries to preserve its culture from one cycle to the next. It would be anthropocentric to suggest that humanity is immune to any of these fates. Therefore another view is that we ourselves do not exist long enough to encounter alien life. Indeed, there are probabilistic arguments which suggest that our end may occur sooner rather than later.

This isn't just wild fantasy. To take just one possibility: not only has our technological capability been increasing exponentially over the past few centuries but so has our consumption of energy resources. These resources are limited. If it proves not to be possible to come up with some kind unlimited energy source and if we cannot get off this planet before the scarcity begins to really bite, in the fullness of galactic time we are going to find ourselves in a vicious fight for those resources, with unsustainably large populations and with political and social structures well adapted to creating massively destructive violence in such a situation. This is only a silly thought, but maybe the Iraq war is, if looked at from a very long term perspective, the first twitchings of something big.

Honestly, I don't normally have much time for this kind of apocalyptic thinking but I found this one quite interesting.
Posted by Nonjatta at 9:55 pm

Is it a case of anything is better than learning your Japanese?