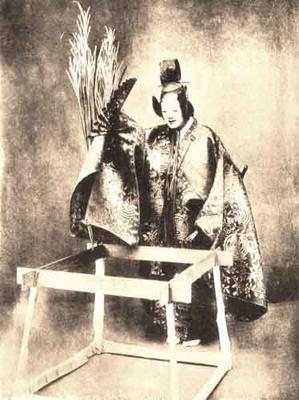 Izutsu (or "The Well Side) was written by Zeami, the dominant figure in the early history of Noh. It is one of the classics in the Noh canon.

Izutsu is based on an old story from the Ise Monogatari, a 9th century collection of stories, many of which are based on stories about the romantic encounters of a "certain man", traditionally identified as the poet Ariwara no Narihira.

Zeami's play starts with a priest arriving at a ruined aristocratic house. A village women arrives to tend the graveyard in the house and, as he watches her, the priest becomes intrigued. He asks her why she is tending the grave and she says there is a story behind the place. She begins to tell the story from the Ise Monogatari:

A man and a woman knew each other from early childhood. They were good friends, competing against each other to see who was taller by measuring each other against the local well. As they grew older, they began to feel more self-conscious in each other company and drifted apart.

The boy eventually realises how beautiful his childhood friend has grown and composes a poem saying only that he has grown tall while he hasn't seen her. She replies that her girlish hair has grown past her shoulders :"If not you, who'll do it up for me?"

They get married. The man later falls in love with another woman and takes to making visits to this woman's house. One stormy night, as he is leaving the marital home on one of these visits, he notices his wife, without knowing that he is looking, compose a poem saying that she is worried about his welfare on a journey on such a stormy night. It brings home to him how much he is loved and he does not go to the other woman. He never goes back.

When she has finished the story, the village woman looks at the priest and says she is the wife in the old 9th century story. She disappears. He has seen her ghost. The priests asks a village man about the place and hears the same story again. The villager suggests that, as a priest, he could offer a prayer to her soul and the priests decides to sleep at the ruined mansion. She comes to him again in a dream. This time she is wearing her husband's clothes. She dances and sings about how much she loves her husband and how much she yearns for him. She looks into the well that they had stood beside as children and sees his reflection. She then disappears.

I am no expert on Noh drama and I warn that may have got details of this story wrong but this final image in the drama seemed extraordinary. On stage, the audience at Kamakura's Takigi Noh saw a man wearing a Noh mask representing the dead soul of a woman appearing in the dream of another. She was dressed in man's clothing, and looked into the well and saw in the water, not her own face but, the mask of the man she loved beyond death. It is very multi-layered and yet, in the context of the play, strikes the viewer as such a simple expression of love.

Here is a translated text of Izutsu.
Posted by Nonjatta at 12:27 pm