I'm not sure whether it is a good or a bad thing for a load of white politicians [1,2,3,4,5] to be debating in public the issue of Muslim women wearing veils. That is a genuine "not sure". This debate is teetering right on the faultline between multiculturalism and integration and there are relevant truths on both sides.

In the end, I found this guide to the veil the most informative thing to come out of the debate [2].

One little footnote I might add is that anyone saying that the covering of women's heads per se is somehow fundamentally alien to British culture should first read their St Paul and then might usefully take a look at the Lost World of Mitchell and Kenyon DVDs [1,2], which show footage of working class women at the start of the 20th Century in and around Blackburn, the consitutuency of Jack Straw, the politician who started this debate: 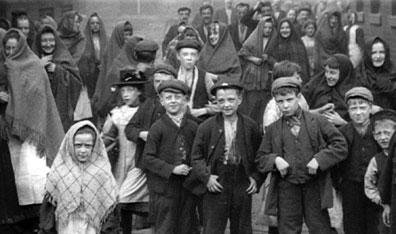 Bet that girl in the pork pie hat (second row, centreleft) came to no good!