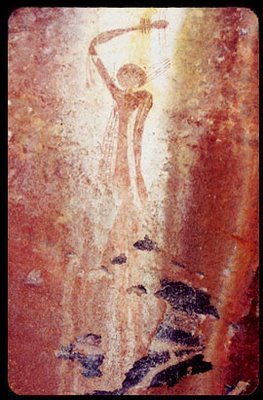 There are up to 100,000 rock paintings spread over 50,000 sq. km of the Kimberley area of Australia in a style quite distinct from Aboriginal rock art. These paintings are believed to be at least 17,000 years old, perhaps much older.

Some people believe it is evidence of a pre-Aboriginal culture. The thesis has caused controversy in Australia, where claims of a culture being displaced by the Aborigines are politically sensitive. Some Aborigines have condemned the paintings as "rubbish art" and there are accusations in this article of vandalism and overpainting by some Aborigines (although I always thought overpainting was a feature of Aboriginal rock paintings in general). The article does not give enough space for cool analysis of what may be an overstretched theory but it is worth reading if you have a few moments.

Anyway, the paintings are beautiful. Below is a Bradshaw painting with more recent Aboriginal paintings below: 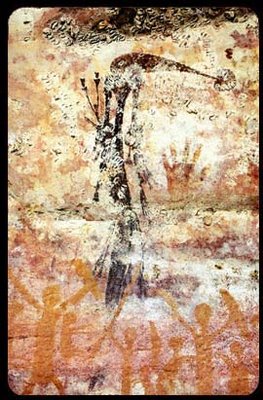