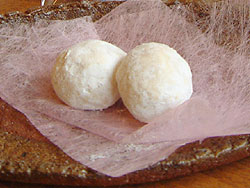 Today we went to the hospital to visit A.'s grandfather, who unfortunately is not very well at the moment. Talking at his bedside, he mentioned that he had been visited by "kashiya", which means "sweetshop". For a moment I thought either my flimsy language skills were worse than I thought or A.'s grandfather was having a senior moment. It seems neither was the case.

If anyone has seen "The Englishman Who Went Up a Hill But Came Down a Mountain" you may remember that the villagers in the small rural Welsh community in which the film is set were called things like "Johnny Shellshocked", "Williams the Petroleum", "Davies the School", and "Evans the End of the World", rather than using proper surnames. The problem being that their real surnames were useless because so many people shared the same ones.

Anyway, it seems a similar thing happens in our district. Among those who are not commuting newcomers, there are only really five extended families in the area and so surnames became a bit useless here a while back (actually, I don't think they even had them until the late 19th century). Instead, A.'s grandfather was using "yagou", a system of nicknames which have been attached to each of the subbranches of those extended families for generations. The "kashiyas" got their name because once, way back in the mist of time, they ran a sweetshop. There are also "the indigos", "the buckets", "the roofers", "the sandal sellers" and "the retireds". These are not these people's present occupations, it is just that a head of the family a long time ago was once retired or once made buckets. It is like being present as surnames emerge from the primeval soup.

I have talked before about how we are in a curious situation here, living in what has become a commuter city but in a family which has farmed in this district for centuries. I kind of like it.
Posted by Nonjatta at 9:05 pm

hey dude. its been forever since i last came hre. been offline for a while now. anyway, hope your grandad gets better