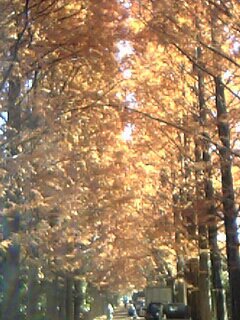 It seems ridiculously late in the year to an Englishman, but Autumn is reluctantly giving way to Winter here. There is still fruit on the trees and a glorious mixture of yellows and reds in the dying foliage, but there is also fruit rotting amid fallen leaves at our feet.

Not to worry though, we may still have months to go until Spring rudely interrupts Winter's meditation, but a new blossom has already appeared on the trees at Tokai University. Rather unusually, it flowers at night. It is called "Kurisumasu Irumineshon".

Christmas is obviously not a big religious or family festival over here but it is far from ignored. Christmas Day is seen as a time for lovers to spend time together. Like everywhere, it has also become an excuse for rampant consumerism. Anyway, Tokai has done a very good light show. 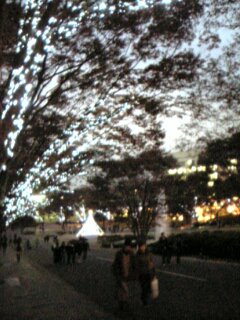 Looking more closely at this image, it is a bit weird. The poor quality of my mobile's camera makes it look as though there is blue sky between the leaves of the trees failing to illuminate a dark street. Or have I had one too many sakes?
Posted by Nonjatta at 3:16 pm

Very Magritte. So are the flowers the blurry bits between the tree branches?

The flowers (christmas lights) are the blurry bits

As I boringly keep reminding people here - the first day of winter on this latitude is 21 December, despite what the weather FEELS like!