ZZ blows his top, G mows his mom and pop 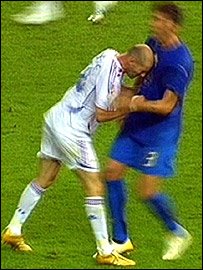 Zinedine Zidane said of his butt to ribcage of Marco Materazzi in the World Cup final:

It was an act that was not pardonable. I apologise to all the children who might have seen it. I always tell children that they should avoid doing such things.

I wasn't aware that my one and a half year-old son had seen the final until he performed a very similar Cardiac Plexus butt on my wife a couple of minutes ago. Zidane should be ashamed.

By the by, G. combines a number of fighting techniques in his mixed martial arts style. Grappling is his real strong point, with ear grabbing and hair pulling techniques typically used to achieve his favourite sitting on the head and twisting the nose hold. However, as the Zi-butt showed, his influences are various.

He is also about as eclectic as a lyrebird in his copying of the sounds around him at the moment, but that is another story.
Posted by Nonjatta at 9:05 pm

I was watching the game with 5-month-old William in my arms, and I didn't reckon he was paying much attention, but this morning as I was kissing him goodbye, he headbutted me! It's a contagion. No more televised football for him, at least for the next four years.