Perhaps my most unrelaxing drink 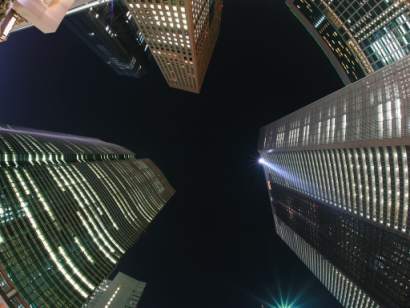 When God was installing the courage batteries he must have accidentally picked up a couple flat ones when he came to me.

A. and I had a romantic evening in Tokyo on Wednesday. Her Mum and Dad had given us a night off from the nappy changing and nose twisting as my birthday pressie. Unfortunately, the Turkish restaurant we had booked, called Marumara, turned out to be a bit of a disappointment. The food was OK, though not overly plentiful, but the service was appalling. The wine we ordered never arrived and by 9pm it became apparent that our visions of a relaxed evening supping the red stuff and talking nonsense were going awry (despite a generous supply of nonsense from my side of the table).

Anyway, the evening needed saving, so I hit on the bright idea of going to a bar with a really good view of Tokyo and having a couple of beers. The guidebook had a list of such establishments and we decided (after, let's admit it, a bit of a barney about my disappointment with Marumara) to go to Hibiki, a bar in Shiodome. 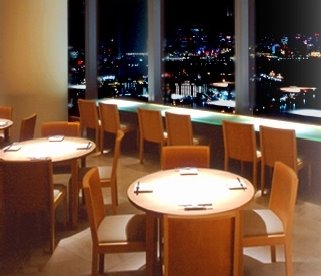 Well, not so much in Shiodome, as perched above it. After a great ride through the heart of Tokyo's newest skyscraper district on the Yurikamome or "swinging seagull", Tokyo's much more spectacular equivalent of London's Docklands Light Railway, it started to dawn on me that to get this spectacular view I was going to have to ascend 46 floors. That is a lot. I discovered there was a special express lift to get you up there and that they had kindly put it one the side of the building ... with glass sides. I had to stand with my back to the sensational view, my eyes fixed on the floor counter, as we zoomed heavenwards. A. seemed equally nervous. Once in Hibiki, we were led to our table: one of the best in the house, knees touching the glass, the sheer drop half a centimetre away. I ordered a beer, fixed a smile and, with a stiff neck, trained my eyes on the horizon. It was at this point that the interesting question about what exactly would happen if there was an earthquake occurred. 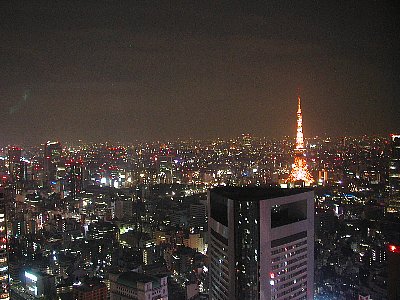 My batteries must not have been completely flat because I managed to bolt a second beer down a dry throat. By the time I was back at ground level, I was ecstatic. Hibiki's vertigo torture had turned around the evening. It will now be a fixture on my Tokyo tour for visitors. I might stay at the bottom though, if you don't mind.

(One symptom of my panic up there was that my photos were very blurred,
so I nicked some other people's pictures of the same views. )
Posted by Nonjatta at 1:55 pm

I ditn't think much of that place. Way too high for my liking!

But another Hibiki, also on Yurikamome line (Odaiba, I think), is just lovely. It has got gorgeous view and it doesn't give you vertigo.