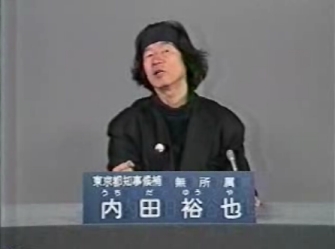 In Japan, candidates running for certain political positions have the right to a brief election broadcast. The format is very restricted. They are only allowed to talk to camera for a few minutes. No moody videos, no husky voiceovers, just a monochrome backdrop and a microphone. Not exactly compelling viewing in most cases. Some people, however, have the ability to transcend their medium. The election in question was way back in 1991. I think the guy in question was Yuya Uchida, a successful professional singer.

He goes in for that special style of English which, if you live in Japan for anytime, you get used to hearing shouted at you in bars by a subgenus of Japanese men of a certain age. Here is a rock 'n roll manifesto, from his Japanese website (There is also an "international website" here.):

"By the rock'n roll power of fuckin' VENTURES & boogieing YUYA, Japan is gonna be the 3rd nation of bopping rock!! Wish!! Rock'n Roll is here to stay. Right on!!"

All very true. You can't argue with it. Uchida won 54,000 votes in the 1991 Tokyo Governor Election. Can't help thinking that he might have been preferable to the present Governor, Shintaro Ishihara, another mad old celebrity (famous for writing novels in which thrusting young men shoved their penises through shouji screens). Ishihara is a more dangerous type of nutter.
Posted by Nonjatta at 11:17 am