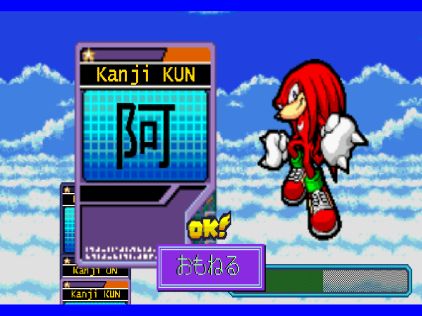 UPDATE: This game is no longer available. I was not the original distributor. I was just pointing to the link. I cannot distribute the software and I cannot offer any guidance on installing it because I don`t own the rights. I don`t even have the computer that it used to be installed in.

I stumbled upon a free and fun language vocab drilling game going by the rather bizarre name of Knuckles in China Land. It is a role playing game with a very early 1990s feel, based in the Sonic the Hedgehog world. It has no sound, which would be a great addition, but Andre Dirk, the chap who has put this free tool together, has written a pretty intriguing storyline.

The language learning twist is that, whenever you fight, you drill vocab. We use basically very similar language drilling programs at university but they are about one millionth as fun. I find that when I get too tired to carry on ploughing through the textbook, Knuckles is a good refuge. Here is the download page.

If you had the time, you could input any vocab list from any language into the game, but, for those not prepared to put in that effort, there is already support for Japanese, German and Indonesian. The Japanese stuff is particularly strong, with a whole range of downloadable vocab lists, ranging from basic to very advanced. 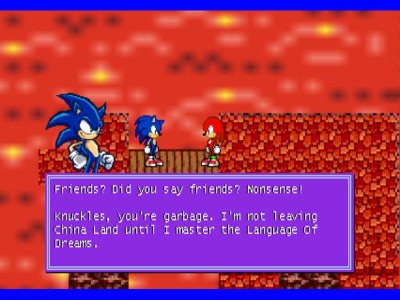 Oh, and here is a slightly cryptic explanation of the bizarre name.
Posted by Nonjatta at 11:01 pm

Could you please upload this game to some place? It's unable to download it from torrent.

I am sorry. This game is not my game to distribute. I think you need to approach the original maker.

I can't get an answer from author.
And I can't understand why don't you want to help, since it is freeware game. It became inaccessible, because the author has more important things to do.

1. I too have more important things to do.
2. The fact that it was once distributed as freeware does not mean it is OK for me to distribute it now. It was not distributed under an open source/creative commons license, as far as I remember.
3. Your manner is not very persuasive. I can understand your frustration but hectoring someone who does not have the right to distribute someone else's work is not going to help.
Sorry.

Look, you write, "You could input any vocab list". It's false.
One really couldn't input any, because "this game is now no longer available and, no, U cannot distribute".
The worth of your post is zero, and it only confuses users who trying to google it.
You are the big ass, i think.

I don't think abuse is appropriate here. There is a date on the post and a note at its top. Calm down.

I agree with ex-citon.
this post really mislead me lol and I thought I could get some help here why I cant install the game. It always says I need to dl .NETframework v1 but I already have v4. O.o

Please read the note at the top of the post. I think it is sufficiently clear.

Is version 1 of the .NET framework version 4?

Get the prescribed version of .NET required by the game and it will work.