Those Magnificent Men in their Driving Machines 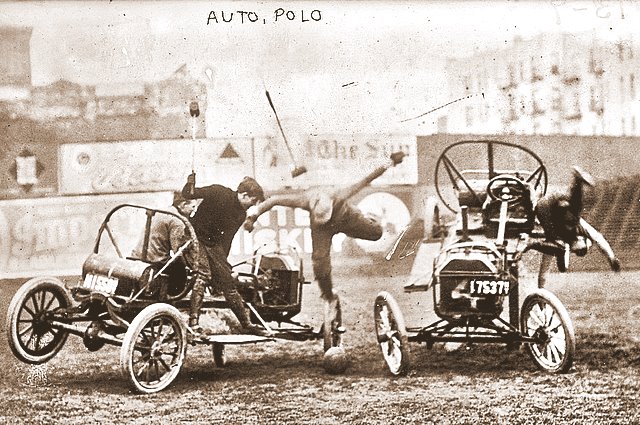 What I love about this is that the fellow on the left seems to have every intention of carrying through with his swing.

It seems auto polo was a proper sport before WWI.

Here is a NYT report of an event at Madison Square Garden in December 1912 which was watched by all sorts of society notables including Vincent Astor:

"There was one near accident during the game, coming in the third period, when the King-Ferriter machine turned turtle. Both occupants escaped serious injury by jumping, but Ferriter was badly shaken up in the fall and was not able to resume playing for two minutes ..."

In the next game, Mr Ferriter also came a cropper:

"During the first period of this game the two machines met head on in the race to the centre for the ball and the King-Ferriter machine was badly disabled. The wheels, axle and part of the frame were badly bend from the force of the collision and the auto had to be pulled of the playing surface ..."

They found another machine and carried on.

I have no idea whether Mr Ferriter is the flying man in the picture but I can`t help but suspect that it is he.