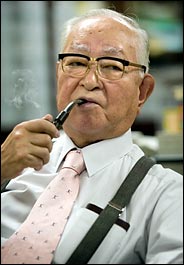 Japan’s most powerful media baron, Tsuneo Watanabe, has stepped from the shadows and is fighting the nationalist sentiment that his empire had once encouraged, according to the New York Times.

"This person Koizumi doesn't know history or philosophy, doesn't study, doesn't have any culture. That's why he says stupid things, like, 'What's wrong about worshiping at Yasukuni?' Or, 'China and Korea are the only countries that criticize Yasukuni.' This stems from his ignorance."